We take a look at Infogrames' upcoming snowboarding game.

Infogrames recently invited the press to play TransWorld Snowboarding, its upcoming snowboarding game for the Xbox. Under development by the Finnish studio Housemarque, TransWorld Snowboarding walks the delicate line between being a simulation and providing over-the-top arcade thrills that will appeal to most anyone. We were allowed to play the game in its pre-alpha state, and if looks and gameplay modes are any indication, Infogrames could have a hit on its hands.

Despite its early state of development, TransWorld Snowboarding already includes a healthy roster of gameplay modes. The game is broken down into three primary sections: single session, TransWorld tour, and multiplayer. In single session, you can attack any event you choose. TransWorld tour, meanwhile, serves as the career mode for the game. The multiplayer component will include both split-screen action and a turn-based game of Horse. There are five total events to choose from in both the single session and TransWorld Tour modes. Slopestyle lets you cruise down the hill while attempting to accumulate as many points as possible; "Boarder X" is a war on the mountain as you jockey with other riders to reach the bottom of the hill first; time attack asks you to get down the hill as quickly as possible, unimpeded by other riders; backcountry lets you forge your own trail off-course; and the straight jump gives you ample opportunity to pull as big a trick as possible.

TransWorld Snowboarding will include 10 real professional snowboarders--seven men and three women. The roster of riders includes Todd Richards, Peter Line, Kevin Jones, Tina Basich, and Barrett Christy. Their real sponsored clothing and gear are included in the game as well. While the game's 18 different courses aren't kicker-for-kicker replications of real hills, the real-world locales used for the game--including Finland, Switzerland, Canada, and Germany--contain enough visual cues to pair the terrain with the appropriate country. The courses, while not completely exaggerated like those in the SSX franchise, have plenty of huge cliffs to boost from. This ensures plenty of airtime in each run and helps make the game fun while retaining elements of realism. Obstacles are arranged in such a way that it's easy to find lines down each run, which will let you link one trick to the next. But the obstacles aren't lined up in a row, so you'll have to be a crafty player with some skill to make the lines work.

No snowboarding game would be complete without a roster of tricks, and TransWorld Snowboarding has 16 different grabs and endless combinations of spins and flips to keep things interesting. The control interface is similar to that of Microsoft's Amped: Freestyle Snowboarding except that it's much easier to time your spins and flips when leaving the lip of a kicker. Ollies are performed with the A button, grinding is accomplished with the B button, and the X button is used to give your rider a speed boost. As in Amped, grabs are performed with the right analog stick. But unlike in Amped, pushing down on the right analog stick until it clicks can access an entirely new set of grabs. The control scheme works predominantly well, and the physics of the board edges are forgiving enough to keep your speed despite carving from one side of the hill to the other. As you successfully land tricks, a turbo icon in the bottom right-hand corner of the screen grows larger, allowing you to boost for longer periods of time. Certain objects--such as ice walls and fire barrels--are located throughout the courses and can increase your trick points. Ice walls will positively affect your trick score depending upon how fast you're going when they're struck, and fire barrels will set your board ablaze and add a multiplier to any tricks landed.

In each of the 18 courses, there are anywhere from three to seven level objectives to accomplish. Unlike the location-specific objectives found in most other extreme sports games, accomplishing the objectives in TransWorld Snowboarding can be done virtually anywhere. Most objectives involve jumping a particular distance, gaining a specific amount of speed, or attaining a high score from tricks. This eliminates the need to boost off the same kickers each time down the hill and keeps you from resetting your game if you've missed what you deem an important part of the slope. Located throughout each run are cameramen, hoping to snap a picture of you pulling off some burly tricks. If you impress the cameramen enough, the image will appear on the cover of TransWorld Snowboarding.

Even though it's only in a pre-alpha state, TransWorld Snowboarding is already the most visually impressive snowboarding game on any console. Some runs are three-quarters of a mile wide and nearly five miles long. Because there's no right or wrong way to tackle each course, it's advantageous to explore every last trail, looking for hidden kickers and deep powder. Speaking of powder, the white fluffy stuff in TransWorld snowboarding is the most accurate representation of snow in a video game yet. Boards kick up believable rooster tails of snow, complete with blinding particle effects, and the way that the boards disappear into the sea of white looks very natural. In addition to the excellent snow effects, particle effects are put to good use--they show small drifts creeping across the hill, as well as your rider breathing. Certain sections of each course will take place on icy surfaces, and the sheet of ice will reflect the entire mountain as small tufts of snow blow across it. The rider models are the most accurate yet seen in a snowboarding game, and they are so detailed that it's easy for the trained eye to pick out specific pros even though their eyes are hidden behind a pair of goggles. Environmental mapping is applied to the goggles of each rider so that the surroundings reflect in them, yet you can still see through the shield to spy the face behind the mask. Additionally, riders' faces are completely animated, and they will celebrate after stomping especially impressive tricks.

As stated before, the courses are absolutely huge, but unlike the barren landscapes in Amped, the courses in TransWorld Snowboarding are overflowing with objects. Rails are seemingly everywhere, and if there's no rail to slide on, there's always the roof of a snow-blown cabin to land a trick from. Besides forests of polygonal trees that sway in the wind, there are snowmobiles, skiers, wildlife, and plenty of other peripheral objects that you must avoid. From a texturing perspective, TransWorld Snowboarding is already above and beyond the competition. The multilayered textures used for the snow's surface are more than convincing, and the high-resolution textures used for the riders' clothes will definitely make the sponsors of the game happy. Perhaps what is most encouraging is the variety of textures used in the game. No two patches of snow seem to look alike, and the objects scattered around the courses never look as if they were copied and pasted from another course.

Rounding out TransWorld Snowboarding's visual package are its smooth animations. Riders animate with a nice fluidity, and Housemarque has received plenty of feedback from riders such as Todd Richards and Tina Basich regarding the authenticity of each trick. According to Richards, the Housemarque team has quickly implemented any changes he has requested for trick animations, and the results speak for themselves. Despite its pre-alpha state, TransWorld Snowboarding is already the most visually impressive snowboarding game yet shown to the press. The frame rates have a few slight hitches at times, but with more than seven months left in development, this should be fixed during optimization.

The aspect of TransWorld Snowboarding that is the farthest from completion is the sound. Infogrames is still working on the licensing of bands for the soundtrack, but it will include a compilation of local (meaning California) and major hip-hop, electronica, and punk acts. Representatives from TransWorld stated that artists from labels like Base9 will likely be included, but licensing agreements have yet to be signed. If you're not into these genres of music, you will also have the ability to rip your own soundtrack to the Xbox hard drive. The sound effects in TransWorld Snowboarding have yet to be fully implemented, so it's hard to know how the final product might turn out in this regard.

Even in its pre-alpha state, TransWorld Snowboarding for the Xbox is already the snowboarding game to watch. Its gameplay strikes a nice balance between realism and fun, the graphics are already amazing, and Housemarque is dedicated to creating an aural experience that real snowboarders will appreciate. If you're a fan of snowboarding or just snowboarding video games, it's more than worth the time to track the developmental progress of TransWorld Snowboarding. We'll have more information when we receive an updated playable build. 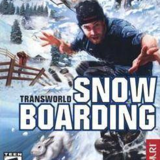