High Moon Studios follow-up to War for Cybertron featured on November cover of Game Informer, billed as a successor rather than a sequel.

Last year, Activision put gamers in the midst of a sentient robot civil war with High Moon Studios' Transformers: War for Cybertron. Today the publisher announced that gamers will get to see how that conflict ultimately plays out next year, as the developer is working on Transformers: Fall of Cybertron for a fall 2012 debut.

As the name suggests, Fall of Cybertron will take players through the final stages of the war between the Autobots and Decepticons and the destruction of their home planet. The game will be revealed more fully in the November issue of Game Informer, which goes on sale later this month and features two separate covers for the game. One of them features Autobot leader Optimus Prime and a dinosaur-like Transformer (possibly Grimlock), while the other shows Prime kneeling over the broken form of Bumblebee. Game Informer indicates the latter cover "reveals some of the darker tone High Moon Studios hopes to explore in Fall of Cybertron."

As for the game's predecessor, 2010's War for Cybertron featured two story arcs, one with the heroic Autobots trying to save the planet and the other with the Decepticons in destructive pursuit of power. In addition to single-player action, the game sported online co-op play, as well as head-to-head multiplayer modes. Game Informer has said Fall of Cybertron continues the story of the original game "but changes and improves upon so many of the fundamental ideas that the developer considers the game a natural successor rather than a true sequel."

For more on the original game, check out GameSpot's review of Transformers: War for Cybertron. 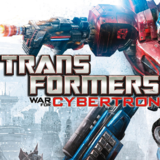