The fourth-entry in the beloved Trails of Cold Steel series will be its last, but far from the end for the greater Trails series.

Nihon Falcom's Trails of Cold Steel series has made waves among hardcore RPG fans for years now. Today, the company announced that the fourth entry in the series will come to North America this autumn on PS4, with a PC and Nintendo Switch release coming in 2021.

If you haven't heard of The Legend of Heroes, it's a series of loosely-connected RPGs that run back to the late '80s. Though all of the games in the series have found fans on Western shores, the fanbase for the series exploded after the release of Trails in the Sky on PSP back in 2011. The Trails of Cold Steel series takes place after the events of Trails in the Sky, and differentiates itself through its high-school setting.

Though Trails of Cold Steel IV will be the last game in its subseries, according to Nihon Falcom president Toshihiro Kondo, we're only halfway through the greater Trails series. "This title holds an important place as the end of the Cold Steel series and the mid-point of an overall story that began with Trails in the Sky," Kondo told Game Informer. "We’ve hinted at various mysteries since Trails in the Sky and all of those related to the Erebonian Empire will be revealed here."

The game's predecessor, Trails of Cold Steel III, first made its way to the West on PS4 back in October 2019. However, the game came to PC very recently, on March 23. In an interview from December 2019, Kondo told why GameSpot that Nihon Falcom sticks to the classic RPG formula. "Since we are a smaller studio, we don't have the resources to create so many assets or craft an open-world game. I will say that no matter how big the studio gets, we'd still focus on story-driven games designed in our particular way. One of the cool things that happen because of this is that while we're focusing on the story, we can eventually lead up to new events that will open the game a bit more. When you're in the final arc, you're able to explore more freely and take on the new activities when you want." 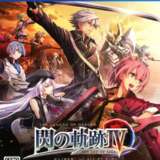 The Legend of Heroes: Trails of Cold Steel IV - The End of Saga
Follow
$39.99 on Bestbuy
Buy