We get spinning with a UK retail copy of Trailblazer.

Tiger Telematic's PR staff has fought tirelessly against the public perception that its device is the mobile equivalent of the Phantom. Now, with retail UK Gizmondos and games in our hands, we can assure naysayers that the oddly named platform exists in this corporeal plane and will be released in the US come August. Trailblazer is one of the more unique of its launch games and could perhaps be described as a combination of Super Monkey Ball and Tron.

In Trailblazer, you control a futuristic rolling ball that looks like two noodle bowls fused together. You can move your ball in any direction, control its level of acceleration, and hop--albeit only a few times per level. In essence, Trailblazer is a puzzle racer, in which you must avoid obstacles to reach the finish line before your time expires. Certain topographical features will speed up your ball, while others will slow it down or even send it tumbling to its destruction. If you fall into a break in the track, you won't die, but you'll lose a few precious seconds of time.

You can play the game in either arcade or time trial mode. In the former, you must complete a series of 10 successively more-challenging tracks in one of three difficulty settings. If you perform exceptionally well on any of these runs, you might win a bronze, silver, or gold medal.

Trailblazer's suspended wireframe aesthetic certainly borrows pages from the Tron movie and games. The resulting look is clean and dynamic, with sharp edges and impossibly thin planes. It's almost as though you're guiding an electron inside a computer mainframe, avoiding degradation in the circuitry. The game runs very fast, although it takes a while to accelerate to your maximum speed.

The music is, unsurprisingly, a collection of electronica tracks. These suit the mood just fine and can be adjusted via the options menu. As each race lasts only 15 to 45 seconds, you won't have to endure any one beat for too long.

Trailblazer is one of the more unique and enjoyable of the launch games we've seen, so we're cautiously optimistic about its release. Our principal concern is that the amount of content included won't be enough to constitute a full-length gaming experience. Also, the game is single-player and won't be using any of the Gizmondo's GPS or connectivity features. 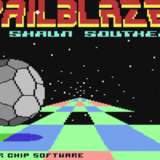