Making full use of its Toy Story license, Activision is taking the next logical move: putting the characters behind the wheels of karts and setting them loose on wacky tracks. Read our hands-on report.

Activision's bombardment of the market with Toy Story-based games is far from over. As per the formula long established by publishers of mascot-based platformers, kart-racing games featuring the popular characters will pop up, as if by mandate. Such is the case with Activision's latest Toy Story-licensed game, Toy Story Racer.

As you'd expect, Toy Story Racer pits the property's characters against each other in a series of kart-races. All the film's major characters - from Buzz Lightyear to Bo Peep - are present, and each boasts unique miniquests that are playable in the single-player game. Also, many of the film's environments will be reinterpreted to fit the game's 19 tracks, and each will house a variety of different play modes. Including standard races, the genre's classic battle mode, and special "quest" races, Toy Story Racer looks to be one of the most complete takes on the genre to hit the PlayStation.

After messing around with the latest version of the Toy Story Racer during Activision's most recent visit, we can safely say that the game is coming along rather well. Aside from the controls being a bit touchy when you are using the analog stick, all of the game's key elements seemed to be in place.

We got to try out a variety of races, each of which worked adequately well. The standard race we played took place on a decently large, multileveled track, which featured a variety of jumps, drops, and partially hidden passages. The race proved surprisingly challenging, which is a testament to the state of the game's AI. The round of battle mode we sampled was also pretty interesting as it took place on an ice rink whose surface was quite slippery, which provided a pleasantly spastic, chaotic experience. All told, the final game should feature literally dozens of stages, when you consider the variant play modes.

Toy Story Racer should prove a treat to Toy Story fans, and its straightforward take on kart-racing should please all but the most demanding of aficionados. Stay tuned to GameSpot for a full review come the game's March 2001 release. 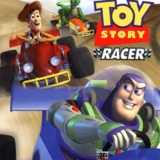