We join Woody and his friends in Disney's upcoming carnival-games compilation.

Disney once again works its magic by bringing one of its newest theme-park rides, Toy Story Midway Mania, to the Nintendo Wii. This actually works out rather well, considering that the ride itself is an interactive, competitive shooter. As you travel on rails during the indoor ride, you lob balls and shoot darts from a cannon that is attached to your safety bar. In this case, it's actually easier to play this game on the Wii because the in-person ride requires that you aim and pull on a string that has a ball attached to launch your projectiles--which can become tiresome. We had the opportunity to check out Toy Story Midway Mania at a Disney Interactive press event to see how it compares to the ride. From what we saw, it's a lot less work and you don't have to wait in line to play the game.

Toy Story Mania is a compilation of more than 30 minigames, and we were able to check out five examples during our visit to get a feel for them. As a warm-up, we played the pie toss, in which you aim the Wii Remote at the screen and throw pies at Buzz and Woody, who are each holding up a red target for you to aim at. This kind of gives you the feel for how the controls work, because like the ride, you aren't shooting straight at the target. There's a bit of an arc when you launch paint balls, rings, or darts, so it takes a few tries to get accustomed because there is no indicator onscreen to let you know where you're aiming at.

The alien ring toss involved chucking colored rings onto the heads of the adorable three-eyed alien squeeze toys from the Toy Story movies. You can aim for other objects as well, and the points are all labeled so you can decide whether you're going to aim for the high numbers or just fire away and hope that your rings land somewhere. Like the ride, there are special events that can be triggered depending on your target. Sometimes you'll trigger a rocket launch and will have to twirl your Wii Remote. Other times you could unleash more targets with a higher point value. The multiplayer will offer play for up to four people once the game is finished, and considering that your score is tallied at the end, it's easy to get really competitive.

We also checked out a skee-ball-like game in which you roll a ball down a ramp and hope that it hits one of the targets on the other side of the screen. We were primarily aiming at cows for 500 points, but interestingly, you share a lane with your opponent. You can't move over to his or her side, but you can definitely use the D pad to aim your ball so that you can technically collide with the other person's ball--on purpose or by accident, depending on your strategy. You press A to load up your ball, and you swing the Wii Remote the same way you would toss a skee ball; swinging it any other way won't work--we tried.

It wouldn't be a carnival-game compilation if it didn't have darts, so there's a minigame in which you fire off as many darts as you possibly can to get the highest score. There always seems to be some kind of Easter egg hidden in these minigames, so we tried aiming at anything that looked conspicuous. There are dozens of targets all over the screen, so it's actually a bit hard not to hit anything.

Finally, the last type of game that we played strayed from the "point and fire rapidly" routine. Instead, you and your competitors take turns aiming and throwing a ball at a wooden structure put together by the little green plastic army men. Your goal is to knock down the colored blocks that are piled carefully on top of the noncolored ones, and usually a well-timed shot at the legs of the tower will knock it over. However, this structure is rotating on a platform with plastic foliage surrounding the edges, so you have to wait until you get the right angle and find an opening. You use the A button to load a ball, and then hit the B button to free up the target reticle, at which point you can hit the button again to lock the reticle. You swing to throw and you get five chances, unless you can hit one of the parachuting crates. As soon as you're done, the next player takes his or her turn.

Everything about this minigame compilation stays true to the spirit of the movies. The characters and their personalities are all intact, and even your main menu is set in Andy's toy-filled room. The games are fun, and the atmosphere has Toy Story written all over it. There's a Play All mode that we didn't get to see, but we were told that a brief cutscene will appear in-between each minigame to tell a story. We enjoyed the time that we spent with the game and hope to get a chance to play more minigames at the Electronic Entertainment Expo. Right now, Toy Story Mania is set for a Christmas release. 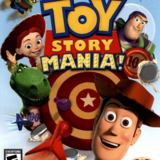