Orcs Must Die! Unchained designer says, "They're not going to go away. And honestly, I don't think you want them to."

Games that elicit toxic player behavior must be doing something right, according to Orcs Must Die! Unchained developer Robot Entertainment. Designer Jerome K. Jones told Polygon that if these unsavory players are flocking to your game, it means you've made something compelling.

"There's probably something good about the toxic players showing up and sticking with your game," Jones said. "The good thing is probably that it's a good game. It's holding their interest, it's keeping them around. It's making them passionate enough to give a damn."

"They're not going to go away. And honestly, I don't think you want them to" -- Jones says about toxic players

Different games approach toxic player behavior in different ways. For example, Riot Games has a history of banning professional League of Legends players who have used racial slurs, harassed others, or verbally abused fellow players. Meanwhile, Strife developer S2 Games has created a "karma" system for its MOBA that aims to foster a more positive overall experience. Valve has even discussed the possibility of having toxic players pay more in Dota 2.

Jones went on to say he anticipates that Unchained will attract "aggressive" players. "I don't think those are bad people," he said. "You just gotta do your best to deal with them in whatever manner seems to work the best."

It's these very players, Jones went on to say, that are going to push Unchained forward and keep it alive.

"They're not going to go away," Jones said about toxic players. "And honestly, I don't think you want them to. You need those people there. They're driving the game. They're giving it longevity. They're giving it passion. And when they find something about your game that they love, they defend it to the death. Those are the same people that can go to bat for you."

Unchained, described as a "fast-paced fortress siege game," entered closed beta today on PC, and you can sign up for a key now at the game's website. If you participated in the previous alpha, you're automatically granted access to the closed beta. That's not the only way to get in, though, as you can also buy a Founder's Club Pack ($20) to immediately jump into the game. 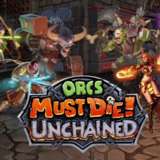