The grand finale of the Creative Assembly's Total War: Warhammer trilogy has been delayed out of 2021, though the developer says the wait "won't be much longer."

Total War: Warhammer III, the Creative Assembly's upcoming RTS set in Games Workshop's iconic fantasy setting, has been delayed. Originally slated to release sometime in 2021, the game will now come in early 2022 instead.

Creative Assembly made the announcement via Twitter, where it said that while it was "tempting to rush to the finish line" the decision to delay the game will make for a stronger release.

Total War: WARHAMMER III will now release in early 2022.
We know this is disappointing, but the extra time means we can accomplish more than we could if we rushed to release this year.
We won’t be staying quiet however, join us tomorrow for the global reveal of Grand Cathay… pic.twitter.com/R4GdObAs9P

While Total War: Warhammer III will be the conclusion of Creative Assembly's Warhammer trilogy, the developer says the game's release won't technically be the end.

"We don't consider this release the end of our trilogy, but the start of years of content and support as we continue to bring the jaw-dropping scale of Games' Workshops fantasy universe to Total War," reads the developer's statement regarding the delay.

Creative Assembly's pledge to support its upcoming game for years doesn't come as a surprise, as the developer is still releasing content updates for the previous installment in the series, 2017's Total War: Warhammer II. That game's recent Hammer & Headstones update--which added new DLC, quality-of-life improvements, and various faction balance changes--was so comprehensive that it actually broke existing campaign saves and mods, though Creative Assembly did provide a workaround by allowing players to revert to an earlier version of the game.

Total War: Warhammer III's delay has it join a long list of games delayed into 2022. When it does eventually release, Total War: Warhammer III will bring with it new additions to the series like Survival battles and expanded multiplayer modes alongside new playable factions like Kislev, Cathay, Khorne, Nurgle, Slaanesh, and Tzeench. 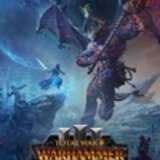