Phantagram is working on a sequel to Cavedog's award-winning real-time strategy game.

Phantagram, the Korean game developer that created Kingdom Under Fire, has confirmed that it is working on a sequel to Total Annihilation, the award-winning 3D real-time strategy game created by Chris Taylor and Cavedog Entertainment. The new game is scheduled for release in the fourth quarter of 2004.

Total Annihilation was released in 1997 and received praise for making a number of improvements in the real-time strategy genre, including 3D terrain, numerous multiplayer options, and seamless but complex interface. The game won GameSpot's Game of the Year award for 1997. Total Annihilation: Kingdoms, a follow-up to the original game with a new fantasy setting, was released in 1999 by GT Interactive.

Infogrames, the company that now owns the publishing rights to the Total Annihilation series after purchasing GT Interactive in November 1999, has not revealed any information about the new game. The game's existence was discovered on an Infogrames release calendar by Korean site Gameshot.net, according to Voodoo Extreme. We'll post more information about Total Annihilation 2 as it becomes available. 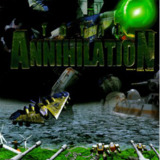