We take the highway to the danger zone and check out the latest PlayStation Network-exclusive Top Gun game.

If you want the truth, then continue reading. If you can't handle the truth, then you'd better stop. After more than a dozen different game adaptations for every platform you can imagine, a new Top Gun free-flying air combat shooter will soon be landing on the PlayStation Network. The Sony-exclusive title will take a closer look at the relationship between ace pilots Maverick and Iceman as they make their way through the Top Gun academy, singing You've Lost That Lovin' Feelin' to one another before heading down to the Indian Ocean to shoot some Russians (not North Koreans). We took the new title for a spin with a hands-off demo at the Paramount booth during E3 2010.

Who's Making It: Top Gun is being developed by Doublesix, a studio belonging to Kuju Entertainment. The developer is best known for its work on the PlayStation 3 shooter Burn Zombie Burn and the Xbox Live strategy game, South Park Let's Go Tower Defense Play!.

What It Looks Like: The game is not particularly striking in its visual capacity, focusing more on the gameplay. The story is told through a series of mini cutscenes that simply involve the camera rotating around a particular environment (presumably the one you're about to fight in) and a small corner camera on the top right of the screen displaying a hazy video of your commanding officer telling you your instructions. The game relies heavily on text and voice as narrative devices.

What You Do: The game will feature two single-player modes: a story-driven main campaign and a horde mode, which will pit players against a never-ending onslaught of enemy fighters. The game will also feature online multiplayer for up to 16 players, with five modes, including traditional Deathmatch, Team Deathmatch, Capture the Flag, and a bombing run. The single-player story campaign will focus on Maverick and Iceman's battles in the Indian Ocean, with brief sequences at the Top Gun academy. Original screenwriter for Top Gun Jack Epps Jr. has provided the dialogue, which includes plenty of quirky references to the film. Fans will be pleased to know that a rerecording of the Highway to the Danger Zone anthem features prominently throughout the whole campaign. Players will fight a series of missions and will be able to choose from six different planes unlocked throughout the game, including an F14, an F16, and some Russian models.

How It Plays: The game plays largely like an arcade flyer, meaning you will never run out of missiles and your health will automatically regenerate if you stay out of enemy fire for long enough. The game also encourages players to pull off risky maneuvers and Top Gun-like crazy moves. While flying, you will use R2 to accelerate and L2 to brake; pressing both at the same time will cause the plane to use g-force and produce a tunnel-vision-like effect. The square button will be used to launch missiles, while the X button is for cannon attacks. The D pad will be used to give directives to your wingman, who can attack targets, defend your plane, or deploy flares to evade oncoming missile attacks. There is also something called CFI (a reference to what Maverick can do in the film), which pulls back the camera from the plane and allows players to see where enemies are located. Three bars at the bottom right-hand corner of the screen will measure boost, CFI, and health. We're also told that the game's developers have put in special challenge runs at the end of each mission; successfully completing these will earn players PS3 trophies named after memorable quotes from the original film.

What We Say: We're sure that Top Gun enthusiasts of all ages will love this game. Just make sure you brush up on your knowledge of the film before you play; otherwise, you might find the magic is fleeting. 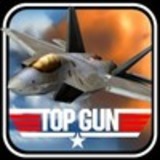