If there's one genre that's rapidly becoming overcrowded on consoles, it's street-racing. There aren't hundreds of street-racing games, but many of them are so similar (and borrow so much from EA's original Need for Speed Underground) that it seems unlikely many of you will have room for more than one of them in your collection. Kemco recently announced its intention to release Babylon's Top Gear RPM Tuning in North America early next year, so we took an early Xbox build of the game out for a test-drive to find out what, if anything, will set it apart from Need for Speed Underground 2, Street Racing Syndicate, Midnight Club 3: DUB Edition, and the rest of the gang.

Like most of its contemporaries, Top Gear RPM Tuning features a story-driven campaign, which in this case is known as the adventure mode. In the adventure mode, you'll assume the role of a guy named Vince who wanders into a garage to buy a new car and ends up getting involved in the local street-racing scene. Predictably, you'll start out with a single car (one of three instantly recognizable but unlicensed models) and a small amount of money to customize it with. As you progress through the game, you'll make copious amounts of money, spend it all on further improvements to your car, make even more money, and then basically just keep doing the same thing until your car bears little or no resemblance to the one you started out with and is capable of speeds that'll make your eyes bleed. Kemco recently issued a press release stating that Top Gear RPM Tuning will boast "virtually limitless vehicle customization options," but judging from we've seen to date, that actually translates into customization options that feel quite limited when compared with the ones featured in some other games in the genre.

The tuning options are divided into exterior and mechanical categories, the former of which (with the exception of tires) will have no impact whatsoever on your car's performance, but will increase your "fame" rating in the game. Purely aesthetic modifications available to you will include body kits, rims, and lights--many of which will be locked at the start of your street-racing adventure. The modifications, although limited in number, vary a great deal and include everything from parts that are barely distinguishable from the standard to really outlandish stuff that wouldn't look out of place in a 24-hour race at Le Mans.

Far more important than the exterior modifications--particularly since there's no option to take your car online and show it off to other players--are the mechanical upgrades that will drastically improve your car's performance. The mechanical side of tuning in Top Gear RPM Tuning is actually quite comprehensive, and will allow you to upgrade numerous parts that fall into the engine and chassis subcategories. We found that the effects of the upgrades were instantly noticeable when we returned to the streets, and the addition of a nitrous-oxide system, for example, not only afforded us significant speed boosts when required, but it also gave us a chance to check out the game's impressive blurring effects--which do a good job of creating a sensation of speed that's otherwise absent. The streets in the game, incidentally, form part of a large city that bears more than a passing resemblance to the city in Need for Speed Underground--complete with multiple storm drains. The routes we've raced to date have all been quite varied, though, and feature a good number of shortcuts and alternate routes.

Our experiences on the streets of Top Gear RPM Tuning have been mixed, which is exactly how we'd describe the handling of the cars in the game at this point. For the most part, the handling is quite forgiving, and there are plenty of corners that you can take at full speed without ever having to worry that you might lose control. At other times, though, the game will punish you for making a seemingly innocuous error, such as driving over a sidewalk to take the same shortcut that all your opponents do on every lap, which on several occasions resulted in us spinning wildly out of control. We also found that we would invariably spin out of control after any collision with an opponent--which would be fine if the collision appeared to hinder their race in some way as well. Ironically, we've not found Top Gear RPM Tuning to be a difficult game in the slightest thus far, thanks to an overly forgiving rubber-band AI system that causes opponents to slow down or crash if they get too far ahead of you, and the fact that while winning races in the adventure mode earns you extra cash to spend on your car, it's rarely required to advance the story.

Despite the numerous flaws in our unfinished copy of the game (Did we tell you about the traffic lights that don't turn green at the start of a race? Or the time that we were thrust into oncoming traffic about a millisecond after getting off the start line?), Top Gear RPM Tuning isn't a game that's totally devoid of merit (some of the stickers are cool, anyway), and we're somewhat optimistically looking forward to getting our hands on a more-complete and much-improved version of the game in future. Expect more information on Top Gear RPM Tuning in advance of its early 2005 release. 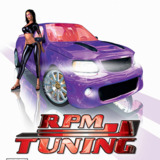