Activision gives us a peek at the special GameRiot demo of the next Tony Hawk game.

This summer marks the return of the Lollapalooza music festival, and along with it comes the Microsoft-sponsored GameRiot, an area at the festival where you'll be able to get your hands on several high-profile Xbox titles, both current and upcoming. One of the titles on display will be a special demo of Tony Hawk's Underground. The game will be one of several used for a competition at the show. Activision was gracious enough to give us a look at the special Lollapalooza demo of THUG, which seems to have been built specifically to showcase some of the game's new features.

The timed demo starts off with a short series of challenges meant to familiarize you with the game's mechanics. It then goes into a free-skate session. The challenges you're presented with focus on the new ability to pick up your board and traverse the level on foot. These challenges showcase your ability to start a combo, dismount, and then "caveman" back into the combo elsewhere by having you grind on a traffic barrier, run across the roofs of a series of cop cars, and then jump back on your board to grind on another traffic barrier. Players have only a short amount of time to get back on their board if they want to keep the combo going, so impeccable timing appears to be essential.

Once the challenges have been completed, you're able to skate around the level however you like. The ultimate goal is to earn the highest score before time runs out. The level from the demo is modeled after a slightly run-down New Jersey neighborhood, and the size of the level appears to be much larger than what we've seen in previous Tony Hawk games. The level also shows off the exploration aspects of Tony Hawk's Underground, in that there are certain areas that you can reach only by getting off your board. Specifically, there are two houses whose pitched, curved roofs make for a great high-altitude half-pipe, one that you'll have to do some climbing to get to.

Though the Lollapalooza demo gives only a quick glimpse of what's in store for THUG, what we've seen has definitely gotten our attention. Stay tuned--we'll have more-comprehensive coverage of the game in the near future. 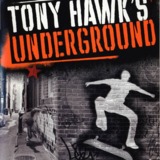