We rolled around suburbia grinding rails, causing mischief, and racking up a heck of a hospital bill in the Xbox 360 version of Tony Hawk's Project 8.

LEIPZIG, Germany--At the 2006 Leipzig Games Convention Activision's booth takes up a prime piece of real estate right next to Konami, Nintendo, and Sega. The centerpiece of its grand display is a massive halfpipe skate ramp, around which are kiosks where visitors can get their hands on the latest games in Activision's long-running Tony Hawk series of skateboarding games. The most notable new title is Tony Hawk's Project 8, which is playable on the show floor. We decided to give the game a go to see just how differently it plays from the previous titles in the series.

We started out with a punk-type skateboarder with a blue mohawk. The area we explored was suburbia, and we skated through backyard pools, quiet cul-de-sacs, neighborhood parks, and quaint gardens. If you've played previous Tony Hawk games you'll be able to pick this one up and feel right at home. You move using the left analog stick, jump with the A button, grind with the Y button, perform flip tricks with the X button, and grabs with the B button. You can also pivot using the left and right triggers. The trick, of course, is to string together as many tricks as possible without falling. Doing so will earn you combo points, and you can still pull off a massive trick chain that could feasibly take you through an entire level.

The basic structure of the game is the same. You'll see highlighted people around the world, and you can get up close to talk to them. Each character will present you with a challenge. The first challenge we saw required us to grind around a curb in a cul-de-sac, passing over four colored spots in a row without stopping. By completing the challenges you'll increase your rank and get that much closer to placing in the coveted Project 8.

One of the new types of challenges will be tied into the new bail mode where you'll control your fall. The damage you take as you flop around is translated into a hospital bill. While you'll see this tally at all times while you play the game, the actual amount only comes into play during these new challenges. Though we weren't able to try them, the challenges appear to encourage some self-inflicted pain. You'll apparently be tasked to rack up a set amount of damage by controlling your bail to ensure maximum pain, and a suitably high hospital bill.

Tony Hawk's Project 8 looks good in action, although it's not much of a leap forward from the previous game in the series. For one thing, the frame rate isn't stable, and we noticed it dipping quite frequently. There were also the occasional jerky animations and odd collision-detection issues. Many times the skater didn't seem to actually make contact with objects in the environment, which looked weird. However, there's still plenty of time before the game releases, so hopefully these issues will be addressed. As for the rest of the graphics, there's a good level of detail in the environments and character models, and the skaters look appropriately awkward when bailing or doing elaborate tricks.

Tony Hawk's Project 8 is scheduled to be released this November. While you wait you can browse through all of the screenshots, previews, and movies coming from the Leipzig Games Convention. 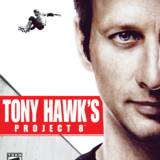