At a recent EA gamer's day, we got an up-close-and-personal look at the 3D action-adventure being developed by MGM Interactive and Black Ops.

Bond is back - and on the PlayStation. At a recent EA gamer's day, we got an up-close-and-personal look at the 3D action-adventure being developed by MGM Interactive and Black Ops. Loosely based on the movie, Tomorrow Never Dies follows Bond as he battles evil media overlord Elliot Carver, who is determined to cause a war between the Chinese and the Brits - he's trying to trick each nation into thinking that the other is about to attack. Your job - as Bond - is to stop him, using all the weapons in your arsenal.Weapons and gadgets are obviously a major part of any Bond game, and you'll have a number of them - cufflink detonators, laser designators, thumbprint scanners, tiny tracking devices, ski-pole rocket launchers, satellite link-up cameras, and a mysterious cell device, among others. Plus, you'll also have a sniper rifle (the view changes to a sniper mode when you use it), infrared goggles, and cameras that actually work. Weapons include toys like grenade launchers and proximity mines - there will be 12 to 16 total weapons by the time the game is done. The game pauses while you change weapons, so you'll suffer no penalty if you suddenly decide to kill an enemy with a rocket launcher instead of the sniper rifle. Additionally, there is an optional ghost mode when you're in battle so that you can better target your enemies - without your back blocking the view. But you won't be alone in your quest to save the world. Wai Lin, the Chinese agent who partnered with Bond in the movie will be back in the game, also fighting Carver. You'll have a chance to play as both spies as the game progresses, although you only get to play Wai Lin in one level. Between 60 and 75 percent of the levels are based on things that actually happened in the movie; the rest are things that fit within the Bond universe, though they weren't in the big screen version. A good example is the skiing segment - never happened in the movie, but it looks great on the PlayStation, and it was one of the things the developers really wanted to put in - a Bond battle on ski slopes is just so classic Bond, and as one developer put it, "You want to see him doing Bond things." As a result, the game is in third person - so that you can actually see Bond and all his various vehicles. Sneaking around is definitely a part of this game - you can sneak up to an enemy and pistol whip him. Stealth wall sneaking is another of the features developers are pleased with - along with the ability to duck and roll and dive and fire. And there are a number of missions where ducking and not getting caught are key - after all, Bond is only one man, and he is taking on the many minions of an evil empire.Speaking of missions, there will be more than ten of them: military outpost, Hotel Atlantic, arms bazaar, Carver media center, ski ridge, and stealth boat in Ha Long Bay are a few of them. Within the missions are a number of scenes, which transition quickly and easily into each other - so you'll move from inside to outside, from foot to vehicle, and so on, fairly deftly and without a lot of waiting time.

Plans for the game include a multiplayer mode, which is still being tinkered with right now. The two-player head-to-head matchup mode would have Bond vs. Wai Lin, or some of the other characters from the movie - you'll be able to play with either a vertically or horizontally split-screen. Also, Black Ops is hoping to get official MGM voice-alikes to do the voice work for the game, but nothing has been confirmed yet.And for those die-hard fans of the movie, there are a number of cutscenes taken directly from the film. Additionally, the opening credits of the game play out exactly the way they do in Bond movies, with shadowy female forms, guns, and the theme song; it drops you immediately into a Bond mood and sets the stage for super-secret spy gameplay extremely well. And gameplay is the key to any game. You can't look at Tomorrow Never Dies without thinking of and comparing it to GoldenEye 007 on the N64, but that's OK, because at this modestly mid-range stage in development, the game is holding its own, despite some control and camera issues Black Ops hopes to iron out in the next few months before the release. The game starts off with a simple level that basically involves learning the controls, maneuvering around environmental objects, and practicing targeting on some really simple enemies. The control - in terms of how your character "feels" in the environment - is not too shabby. You have the standard rolls (dodges), strafes, sneaks, and running-around moves that are pretty smooth and easy to pull off if you're in a space that's free of obstructions. Getting Bond to move around objects and go up stairs, however, could still use some work. We did get stuck several times on barrels and basically had to turn around and realign ourselves in a new direction to clear various objects - a function Black Ops says it is still tweaking.Angling Bond in front of an enemy with or without sniping is pretty simple and responsive. The accuracy is a little rough at this point, as the enemies drop pretty quickly if you shoot in their close vicinity, and Bond automatically and blindly seems to stop on his target (with no help from visual indicators such as lock-on targeting). But oddly enough, close-range shooting isn't always as successful as it should be. Again, Black Ops is aware of the targeting problems and plans to work those details out. Also, another feature is the ghosting function on your character. When Bond is attacking someone at close range, you have a default option lets him "ghost out" or become invisible so you can see the target directly in front of you. This can be disappointing if you'd actually like to see Bond attacking the enemy; however, developers did say they're considering making it possible during certain attacks for Bond to stay intact just for a second, even with ghosting turned on, so you don't miss the good stuff.Unfortunately, we didn't get a chance to try out any of the vehicles or skis and such, but we did see them in action, and without getting our hands on the controls at that point, it looked pretty fun. Scrolling through weapons and managing ammo, guns, grenades, health, and mission objects seems intuitive and comfortable. If Black Ops can get the cameras (which are intelligent, with several close-up/distance views available) and collision figured out, this may very well end up being a game to take pretty seriously.Tomorrow Never Dies won't be out till this fall, but we'll be sure to update you as the game progresses this summer. In the meantime, check out the new screenshots.

Favorite Bond moments - everybody has one. During his 35-year film history, Her Majesty's Secret Service's most renowned agent literally has traveled to the moon and back, cheating death countless times while meeting an outlandish cast of hit men, megalomaniacs, and, of course, exotic women. Yet it is specific action sequences, such as Roger Moore skiing off a cliff and parachuting to safety in The Spy Who Loved Me, that stand out most in moviegoers' minds. So when MGM Interactive began considering what kind of game it wanted Tomorrow Never Dies to be, it knew a simple retelling of the film's events - no matter how spectacular they may be - would never do. "What we really wanted to do," says MGM Interactive's Michael Guttentag, "was create a game that felt like a James Bond film. And what does it mean to be in a James Bond film? It's not like you think of one film, even though there are certain favorites. What you realize is [it's] the greatest moments from all the different films that really get you excited. So our concept was to create a game that brought you all these different great moments." Having made this decision, deciding to pair with developer Black Ops, which already has a number of excellent flight and underwater game engines under its belt, was purely academic. As Guttentag elaborates, "We've known Black Ops for years. We've seen not only the quality of the games they've done, but also the dramatic evolution [between each successive] generation of their games. So we really think they have the right foundation to deliver the next level of action-adventure on the PlayStation. Plus, they're only three blocks away from us," Guttentag adds with a chuckle. So will Black Ops reheat what it has created in the past and serve it up to hungry Bond fans as a new game? Definitely not, says John Botti, the president and CEO of Black Ops. "[The previous games] are serving more as starting points. There's a small percentage of Tomorrow Never Dies - less than 30 percent - which utilizes existing technology. We [at Black Ops] have always tried to one-up [ourselves]. So, we weren't comfortable with just going with the existing technology; that's not something that's sufficient, something that's going to fly." Speaking of flying, Bond will be doing just that in Tomorrow Never Dies, along with driving, skiing, scuba diving, and fighting enemies on foot GoldenEye-style. The game's story, surprisingly, begins where Tomorrow Never Dies ends. Why such an unorthodox move? "Part of the fun of a James Bond film is discovery," explains Guttentag." So, we wanted to have a story that [required the player] to slowly piece together what was going on, figure out who the mastermind was, and then go save the world."

In order to do so, you must pay attention to what the game's characters say and do, rather than simply mowing them down. Guttentag elaborates, "There will be non-player characters talking and moving around. You can sneak up around the corner and overhear the bad guy telling his master plan to everybody. That will be part of how you figure out what's going to happen and where to go."

By staying true to the license rather than slapping the Bond name on a side-scrolling shoot-em-up, MGM Interactive hopes to avoid the pitfalls that have trapped previous movie-to-game translations. "We're not approaching this as just another licensing extension," assures Guttentag. "We want this game to stand on its own." 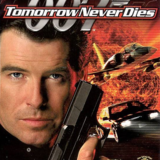