In August, Crystal Dynamics laid out three months' worth of add-on content plans for its downloadable action game Tomb Raider: Guardian of Light. Among the plans were a pair of add-ons featuring new playable characters from other Eidos-published games. While the developer didn't say at the time which characters would be making guest appearances, the studio's official Twitter feed today detailed exactly which familiar faces players can expect.

Gamers tired of raiding tombs as the default pair of Lara Croft and Totec will soon be able to replace them with the gruesome twosomes of Kane & Lynch or the Legacy of Kain and Soul Reaver series. The studio is letting gamers pick which pack is released first, casting their votes with Twitter posts directed "@CrystalDynamics." Both packs were scheduled for release by the end of the year.

Kane and Lynch will be representing the IO Interactive-developed third-person shooter series that bears their name. The odd couple pairing of a psychopathic killer and a hired assassin debuted in 2007's Kane & Lynch and returned for an encore this year with Kane & Lynch 2: Dog Days.

The other pair of downloadable characters--Kain and Raziel--are pulled from Crystal Dynamics' own Legacy of Kain series of action adventure and role-playing games. The franchise began in 1996 with the release of Blood Omen: Legacy of Kain on the original PlayStation and quickly expanded. In 1999, Legacy of Kain: Soul Reaver put the focus on Raziel. Both games received sequels before Legacy of Kain: Defiance ushered the franchise into hibernation in 2003.

For more on Guardian of Light, check out GameSpot's review. 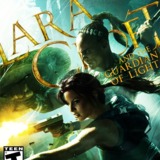 View Comments (109)
Lara Croft and the Guardian of Light