We explore underground caves, the city of Vilcabamba, and the Lost Valley as we check out a work-in- progress version of this Tomb Raider remake.

It was more than 10 years ago that Lara Croft raided her first tomb on the Saturn, the PlayStation, and the PC. Her subsequent adventures have taken her all over the world, but few of them have really managed to recapture the spirit of the original game. After a number of mildly disappointing outings, last year's Tomb Raider: Legend somewhat revitalized the series with a Lara Croft who looked a lot better, was more agile, and had a number of new gadgets in her backpack. Tomb Raider Anniversary, which is currently scheduled for release in May, is a remake of the original game. This remake incorporates not only many of the features that were introduced in Legend, but also adds a few of its own, as we discovered when we recently had an opportunity to play through the first few areas.

Those of you who played the original Tomb Raider will find plenty that's familiar in the Anniversary edition even before you start playing. After negotiating a menu screen that offers three different difficulty settings, as well as support for progressive scan and widescreen displays, you'll be treated to an intro movie that's essentially a better-looking version of the one you saw in 1996. Moments later, you'll find yourself atop a snow-covered mountain in Peru, where figuring out how to reach and unlock a huge gate into the first of the game's underground locales gives you an opportunity to put many of Lara's moves to work. Solving this and every other puzzle in the game involves a lot of jumping between and shimmying along ledges, which is a given, but you'll also be required to put some newer skills to use.

In Tomb Raider Anniversary, Lara can use her grappling hook to swing across gaps and run along walls for a short time. She can also scramble up walls from ledge to ledge provided her feet have some purchase, and anytime she's hanging onto something with only one hand, you'll have just a few seconds to hit the triangle button to prevent her from falling. The triangle button serves a similar purpose anytime Lara looks like she might lose her balance while perched atop a small column or pole, which is another new ability that comes into play a fair amount as you progress through the game and have to negotiate increasingly complex locations.

Lara also has a couple of new tricks when in combat. These tricks include tapping the X button to recover more quickly after being knocked down by an enemy, waggling the analog stick to escape from the clutches of an enemy that has grabbed you, and performing an "adrenaline dodge" when an enraged enemy decides to charge. The adrenaline dodge is a refined version of the somewhat overpowered slow-motion attacks that were introduced in Legend and makes for an interesting risk-versus-reward mechanic because it can only be activated by quickly tapping the dodge button when an enemy's charge causes the screen to blur for a second or two. If you successfully trigger the slow-motion dodge animation, you'll see two crosshairs moving across the screen toward the enemy you're engaged with, and if you hit the fire button at the moment that they meet each other, you'll perform a headshot that's powerful enough to kill many enemies in a single shot.

If your memories of the original game are rose-colored, the environments in Tomb Raider Anniversary will be familiar, but they're much more detailed and will still manage to surprise you on occasion. We've noticed that many of the med-packs can be found in the same spots they were hidden in the original game. However, the same can't be said of the secret artifacts and relics that you'll need to locate if you want to unlock new outfits for Lara and other bonus content. Finding those will invariably require you to stray from the most obvious path and, on more than one occasion, we've only stumbled on them because we mistimed a jump and landed in an area that we were trying to avoid.

Like previous Tomb Raider games, Anniversary is very forgiving where Lara's gymnastics are concerned, making it easy for you to string together very impressive-looking combinations of moves. The real danger, at least in our work-in-progress version of the game, comes from the camera, which frequently positions itself in locations that afford you a great view of Lara but not of her surroundings. The most noticeable problems are when you need to jump backward from a ledge to grab onto another one and when you're somersaulting all over the place during combat to evade bats, wolves, bears, and so on. There are enough autosaving checkpoints scattered throughout each level to ensure that failed leaps of faith and a trial-and-error approach aren't too frustrating, but we're certainly hoping that the camera will be improved for the finished game.

Exploring ancient tombs wouldn't be nearly as much fun if they weren't littered with traps, and there are certainly plenty for you to contend with in Tomb Raider Anniversary. We've already encountered arrows firing across corridors, huge swinging axes, rolling boulders, and collapsing rope bridges, along with a couple of scripted "super-action sequences." Like those in Legend, these sequences are quite cinematic and can be passed successfully only by hitting buttons in time with onscreen prompts. Solving puzzles that involve the use of keys, levers, and cogs serve as reminders that this game is closely based on the first of its kind. But there's no doubt that this is a new Lara Croft adventure and one that promises to make visiting locations like the Lost Valley, St. Francis' Folly, and the City of Khamoon a joy for newcomers and veterans alike. We look forward to bringing you more information as soon as it becomes available. 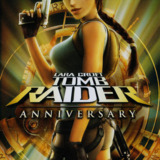