To the Moon - Postmortem Q&A With Kan Gao

We go behind the scenes with the creator and director of the story-driven adventure title, To the Moon.

Last month saw the release of the independently developed PC title To the Moon, a story-driven adventure game that puts players in the shoes of two doctors armed with the seemingly impossible task of granting a dying man his final wish. With its 16-bit-style visuals, all-text dialogue, and emotionally-engaging characters, the game has been critically praised for its clever storytelling and the maturity with which it explores the themes of love and loss.

GameSpot recently spoke to To the Moon's writer and director, Kan Gao, from his home in Canada. To the Moon is his third game.

GameSpot: Can you tell us a bit about yourself? How you got into games development?

Kan Gao: I began playing around with game development about five years ago. With To the Moon, all I wanted to do was to turn an angst-ridden story I had written in high school into an interactive experience. I still think To the Moon is a pseudo video game…like, it's a lot of cutscenes and dialogue and not much gameplay. But there's something really fascinating about being able to walk around a world you created.

GS: So now we know where the inspiration for To the Moon came about, but what about the larger ideas surrounding the nature of time and memory?

KG: The game is pretty much a fan fiction cross of The Honeymooners and My Little Pony. [laughs] Not really. The true story is that a few years ago, my grandfather went into hospital needing immediate surgery for a heart condition. He came through the surgery just fine, but when I visited him while he was still in hospital, it made me realize that these things are a part of life: This happens to everyone. It made me wonder: when it's my turn to be lying there; will I question what I have done with my life? Will I wonder if I would have done some things differently? I think it's something that everyone thinks about now and then, and so the whole concept for To the Moon grew from that.

But that was just a shell; as time went on, several other events happened to me and others who are close to me, and those helped fill the shell and make the game what it is today.

Overall, it's an attempt to turn various misfortunes into something good.

GS: You've got three other projects under your belt: Quintessence, your first big fantasy adventure project; a noninteractive visual short story; and a 20-minute game about a young girl and a bird. How long did it take you to finish To the Moon? And did you have help from others?

KG: The game took me just over a year and a half to finish. I did most of the music, the writing, and directing myself. Since I used a game engine, there wasn't that much programming involved so it was manageable.

Laura Shigihara really helped with the music; she composed Everything's Alright for the game. I also had help in terms of graphics and other things in the game from a few other talented people.

GS: What has the response to the game been like so far?

KG: The response to the game so far has been very positive. I'm somewhat surprised by this…not because I don't stand behind my product or anything like that, but because it's not exactly a conventional game. I think it's widely considered a sin to have chains of cutscenes one after the other; it kind of takes the gameplay out of the game. But it's always hard to tell how gamers will react to games like this. On the whole, I just wanted to make the kind of game that I would want to play myself, and I guess I was fortunate enough that there were others out there who shared my vision and liked what I had to say.

Commercially speaking, To the Moon has now been purchased over 2,000 times.

GS: Are you a big romantic? The game would suggest so! Were you influenced by any particular stories during the development of To the Moon?

KG: Well, after I established the concept for the game, I kind of went and looked for similar things. There are quite a few films that influenced me while I was working on this. I loved Wall-E, for example. It's one of my favorite movies of all time. Other films that really helped to shape the game were Eternal Sunshine of the Spotless Mind, Memento, and the montage from Pixar's UP, which gets me every time.

GS: Us too. We always cry during that bit.

GS: Where do you see yourself headed in the future? Would you like to stay put as an independent one-man game development team or are you toying with the idea of one day joining a larger publisher and making AAA games?

KG: I'm taking my first steps into the industry, so at the moment, I am still unsure of where I'll go. There are a lot of benefits of being an indie developer, the first being that you get to work in your underwear. Second to that, you get so much more control over a project. You have a unified vision: It's easier to make something that flows well if you don't have to consult with a team of 100 people.

Essentially, it's the freedom I love. If I were to pitch To the Moon to an established company, I might be laughed out. It's harder to take risks when you work for an established publisher, which is understandable because there are so many things dependent on the success of everything. When you're indie, you can take a few bullets.

At the same time, being a small team also limits you on the big scale. I'm definitely open to the possibility of joining a larger studio in the future, but at the moment, I'm dedicated to continuing the series that was launched by To the Moon. I just graduated with a business and computer science university degree earlier this year, and so far, I've been fortunate that the game's sales have sustained me thus far without the need for me to go out and get a real job. Let's hope this lasts.

GS: A sequel! Well! Are we going to spoil anything if we ask when, where, how, what, who?

KG: Well, if you really want to know something, I just finished drafting the main theme song for the next episode of To the Moon! It's hard to say how long it will take. Now that I'm not doing any classes, I would imagine it would only take me a year to finish. But don't quote me on that!

I have a few projects in the vault, but I think To the Moon has a lot of potential to be expanded upon. I haven't thought much about what will go in the middle, but I definitely know what will happen in the last installment of the series. It's one of those really flexible concepts, from a writer's perspective at least. I think the reason a lot of sequels fail is they're trying to open up a story that's already been closed. For To the Moon, it's not like John is going to be revived as a zombie or something like that, although that might be interesting…essentially, you have a thematic connection between the episodes, with the two doctors. But at the same time, each episode is open to a completely new story. I can do whatever I want with it. There are no restrictions.

So I think there's a lot of potential and freedom to draft whatever comes up at the time for each episode.

GS: We're certainly looking forward to it. Thanks for your time, Kan. 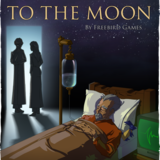 View Comments (22)
To the Moon