Titanic: Adventure out of Time Preview

It's April 14, 1912, and the unthinkable is about to happen to the "unsinkable" RMS Titanic. Cyberflix - who developed the much-hailed Dust: A Tale of the Wired West (which drew high praise from critics but still somehow sold less than 50,000 copies) - have created Titanic: Adventure Out of Time, a first-person adventure game set aboard a rich and faithfully-recreated computer model of the doomed luxury liner. As a British secret agent, the player is sent on a transatlantic voyage under orders to locate and recover a manuscript - and, ultimately, to just possibly avert the looming specter of World War I.

Following in the footsteps of its Western ancestor Dust, Titanic allows players to freely roam a living environment populated by some 30-plus speaking characters, from ship personnel to wealthy aristocrats to shadowy strangers of unknown origin. Painstakingly modeled and researched, the Titanic is reproduced in remarkable detail, from the functional upper decks to the lavish ceilings to the sumptuous ballrooms and staircases. Obviously the ship and her human complement are not represented with 100% accuracy - I figure that would push the interactive character population to upwards of 2,000 for passengers alone - but the sets are easily the most accurate to date for a game, and the basic deck layout is true to the ship's original floor plans. While the spy/thriller intrigue aboard ship is fictional, Cyberflix employed an historical researcher as part of the production team from day one, and many of the story elements are derived from actual events. Part of the purpose of Titanic is to conjure the zeitgeist surrounding the magnificent ship's first and final voyage. For those with an interest in history, there is a neat non-gameplay "tour mode" that allows players to roam the staterooms and halls without having to acquire keys or solve puzzles.

As for gameplay, Titanic offers the incidental interaction of Dust, with characters holding and following their own agendas. As such, much of the gameplay is event-driven and, to a point, completely up to the player. Did that last man you talked to seem offended by your last remark? Does he trust you now? Come to think of it, didn't he seem shaken, or angry, or distrustful? Maybe you should go check and see what he's doing - his agenda may very well have changed as a result of your actions. Once you approach an interactive character, her conversation with you is presented via a largely still close-up, with facial expressions and mouth movements marked with minimal alterations to eyebrows, lips, etc. While this may seem like the teeniest bit of a cheese-out, it saves like hell on CD-ROM space and makes for more gameplay rather than - as is often the case with two- or three-CD sets - lots of megs devoted to bad video.

Titanic isn't a shooter, a horror flick, or a military strategy game. It is, however, an eerie sort of time-travel adventure, whose somber mood and presentation may go over the heads of some gamers. Make no mistake, the luxury liner is going to make her fated date with destiny viz. the iceberg - that's when you switch to CD 2 and things get sticky. For the remainder of the game (the same amount of time, in fact, that it took the Titanic to crack and scream and sink into the ocean) you have a very real 2-1/2 hour race against the clock in which to (quickly) navigate the corridors of the ship, solve whatever situations you have helped create... and just maybe change the course of history.

Titanic is a game, but it's also a dark, toned-down mood piece, a testament to the desire of Cyberflix founder Bill Appleton to create games - I can't believe I'm saying this and liking it, but here goes - whose challenges to the player do not rely on violence. The project has been approached seriously and with respect, like a good movie. It may not be for everyone - but the "what-if" gamer will certainly want to have a look. 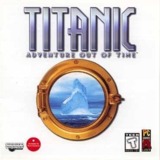