We pull up a chair and sit down with Titan Quest: Immortal Throne to see what's in store for the first expansion to THQ's mythology-themed dungeon crawler.

The Mediterranean is nice, but if you're looking to explore the darker side of mythology, you have to head to Hades. Titan Quest: Immortal Throne is an expansion that lets you venture through the underworld in search of twisted creatures and enough loot to impress even the most devout dungeon dwellers. For more information, be sure to check out our recent preview of the game. We recently revisited the game to play through a few levels of the Tower of Judgement in the depths of Hades to see exactly what Immortal Throne has in store for Titan Quest fans.

In Titan Quest, one of the ways in which you can develop your character is by choosing a school of mastery to study. Each mastery grants your character different skills, allowing you to customize your hero to suit different play styles. In Immortal Throne, one new mastery has been added. The dream mastery is a flexible mastery that can be adapted to both fighting and casting play styles. We played as a dream master to get a feel for some of the new skills that have been introduced to the game.

We started out in the Prison of Souls, where we leisurely wandered around killing groups of huge albino spiders without much difficulty. This is where we first got a taste of the power of the dream mastery skills. We were playing as a fighter wielding a pike, so we had to get in close to attack. The dream mastery skills works well here because many of them have area effects, which means that while you're hacking and slashing away, you can also unleash skills for supplemental damage and status afflictions such as sleep. The most useful skill we found was called distortion wave, which sends a blast of energy out from around your character. The blast is strong enough to take out large groups of foes in one clean shot, and it can be fun to watch piles of lifeless monsters scatter across the map.

Aside from the more than 30 quests and the new skills and mastery, there are plenty of subtle tweaks that have been made to the interface of Titan Quest. For one, there's now an auto sort button for your inventory, so you no longer have to manually rearrange all those potions and weapons to figure out where you're going to put your new armor. There's also a caravan in town now, which lets you store items that can be accessed not only by your current character but also by any other characters you have saved on your PC. So if you're playing a caster and you find a killer new sword, you can toss it off to the caravan for your fighter character to pick up.

In addition to the interface tweaks, there are hundreds of new items to find in Immortal Throne. There are even entirely new types of items, which means that you'll probably really need to make use of that autosort button in your inventory. Scrolls are one new item type that work like one-time-use skills and buffs, but they're much more powerful than the skills and buffs your characters learn. One example we were given was the scroll of vampirism, which drains the life out of all the enemies in a large area and gives that life to your character. The scrolls don't come cheap, though; you'll have to purchase them at a premium rate from merchants. Additionally, there are 75 artifacts that you can create to buff your character. To get an artifact, you first have to find an arcane formula and then take the formula along with the required ingredients to an enchanter, who will assemble the artifact for you.

All of the new content should give Titan Quest fans plenty to explore, but the basic gameplay remains unchanged. The visuals still look quite good, and we especially enjoyed the darker, more sinister look and feel of the environments. There are some nice lighting effects on display, and the characters and enemies look nicely detailed and animate well. We did notice a bit of a frame-rate drop when the action onscreen became too intense, but nevertheless the game looked sharp, especially on the massive widescreen monitor we were using.

If you're itching to get back to the world of Titan Quest, you won't have to wait much longer. The expansion is scheduled for release March 5, so be sure to check back here soon for our full review of Titan Quest: Immortal Throne. 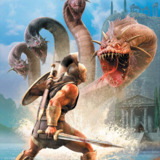