Conspiracy is bringing out two Tiny Toon Adventures games for the Game Boy Advance, one of which is a Puyo Puyo-style puzzle game.

Still in its early stages, Tiny Toon Adventures: Wacky Stackers is a puzzle game that feels like a mixture of Sega's Puyo Puyo and Capcom's Super Puzzle Fighter II Turbo. In Wacky Stackers, pairs of multicolored eggs fall from the top of the screen. Your goal is to align them at the bottom so that you clear groups of four or more, either in lines or in segmented groups.

Wacky Stackers is, essentially a puzzle game with a tacked-on license. As eggs drop in the foreground, an Acme Looniversity-inspired painting rests in the background. All the while, an animated character spite reacts to whatever you're doing at the time. As with most games in the genre, the main gameplay tenet is to create chains of four or more eggs horizontally, vertically, or in an array of other contiguous shapes. Anyone familiar with Tetris, Puyo Puyo, or any other common puzzle game should feel right at home. In a unique twist, though, you can also create L-, C-, and zigzag-shaped pairings, which further increases the odds of chain reactions.

Tiny Toon Adventures: Wacky Stackers is currently on tap for release this winter. We'll have more on the game as it develops. 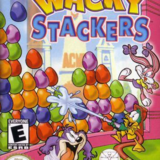