The first Tiny Toon Adventures game to hit the Game Boy Advance will be a side-scrolling fighting game.

Tiny Toon Adventures is very early in development, but it's scheduled to feature hand-to-hand combat, jumping, and a number of Toon-inspired power-ups, such as portable holes, pies, and TNT. Although a great deal of diversity is planned, the version we saw featured only the ability to run, jump, punch, and pick up objects.

From what we could gather from these basic elements, character animation, background detail, and energetic gameplay are the tenets of this licensed Tiny Toon Adventures game. Buster's feet kick up dust as he runs and his face grimaces as he punches, while ghastly ghosts sail about in all directions, courtesy of the GBA's scaling and transparency capabilities. The graveyard level features a number of headstones to leap from and trees to climb, as well as a number of rocks to use as weapons.

We'll bring you more on this fistic Tiny Toon Adventures game as it nears completion. 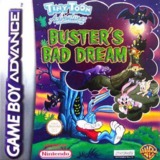