In times of stress, video games have proven to be a healthy distraction. One game that may be especially cathartic is developer Hyper Three Studio's Tiny Lands, which has a simple setup. Presented with a series of 3D environments, players will need to find five differences in each digital diorama. The low-poly isometric puzzle game also features a soothing soundtrack from composer BigRicePiano, and there's no time limit to worry about as you explore each of the diverse environments on offer.

Tiny Lands even features various elements such as fire, rain, thunder, snow, and wind in each diorama, and you'll be able to rotate the levels and zoom in on them to find the small differences between each model. You can see the relaxing game in its official trailer below:

Tiny Lands will be out on Steam on January 22, with a 10% discount on its regular price of $7. A Nintendo Switch version will also be released at a later date.

Steam also just recorded one of its best years ever, as 2020 saw 120 million monthly active players, 62.6 million daily active players, and a peak of 24.8 million peak concurrent players on the digital distribution platform. You can check out highlights of Valve's full Year in Review post right here. 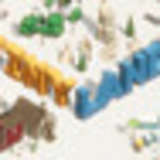