Nintendo has begun running a Japanese-language television commercial in Japan and on the Web for Mogitate Tingle no Barairo Rupee Land--the bizarre role-playing spin-off for the Nintendo DS that features Tingle, the male pixie from The Legend of Zelda series.

The game pits Tingle, 35 and single, against harsh economic realities, as he strives to hoard enough rupees to open a portal to a paradise of limitless wine and women. The 30-second television commercial shows brief shots of the interface and gameplay as the narrator emphasizes Tingle's pursuit of cold, hard cash. One need not live in Japan, however, to view the commercial, as Nintendo also posted it to the Internet. To view the 3.7MB Web version of the TV spot, visit the game's official Web siteand click the button marked TVCM.

Mogitate Tingle no Barairo will be released September 2 in Japan for 4,800 yen, about $41. 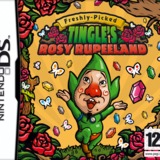