The third game in Namco's successful series of light-gun shooters is coming exclusively to the PlayStation. We went to the shelf and dusted off the GunCon to see what Project Titan has to offer.

Time Crisis is the game that almost single-handedly rejuvenated the light-gun genre. The game used a force feedback-enhanced gun and an inventive pedal-controlled shoot-and-hide system, making it one of the most revolutionary shooters in history. Time Crisis spawned tons of copycat shooters, a PlayStation port of the game, and two arcade sequels. Project Titan, the latest game in the series, is actually a PlayStation-exclusive sequel to Time Crisis II.

Time Crisis: Project Titan actually continues the story of Time Crisis II. You once again take control of the suave Richard Miller, the secret agent who's been dubbed the "one man army." Miller is being hunted by federal agents for his alleged assassination of Caruban president Xavier Serano, and he has 24 hours to clear his name. His latest adventure will once again put him up against his nemesis Wild Dog, who's teamed up with a brand-new terrorist organization complete with plenty of colorful boss characters. Miller will have to gun his way through three large environments and face more than six boss characters if he's to redeem himself.

The gameplay hasn't changed much since the original game. The game uses the same trademark shoot-and-hide system of the series. Miller moves from one tactically sound position to the next, stopping to pop out from behind cover to clear a room full of enemy characters. While the game is on rails, Miller never fires while he moves--the levels are simply a collection of one static location after another. And while the game does feature new enemy characters for you to shoot at, the basic coloring conventions of enemies from previous games has been carried over. Characters dressed in red jumpsuits are deadly accurate, characters in blue jumpsuits are mildly accurate, characters in yellow tank tops wield bazookas, characters in dark green throw grenades, and characters in orangish-yellow jumpsuits award you time when you shoot them. Unfortunately, Project Titan doesn't feature many creative characters, such as the crazy black ninjas in the original Time Crisis, and most of the characters you fight feel uninspired. Additionally, the game has very few hazards and almost no level interaction. One cool new gameplay addition is the ability to manually move in most of the boss fights. While hidden, you can shoot an arrow on the right or left of the screen to take up a different position. This comes in handy when fighting certain bosses, as you can actually flank them. Still, the gameplay in Project Titan seems a little uninspired when compared with that of Time Crisis II or even Crisis Zone.

Project Titan supports Namco's GunCon controller, and it does allow you to use several different controller configurations. You can play using the gun's A and B buttons to hide and reload or plug in a standard controller to the second port of the PlayStation and use the face buttons to hide and reload. This method works surprisingly well, and it allows you to move more quickly than using the gun's buttons with your second hand. The GunCon is still amazingly accurate, and the gameplay takes advantage of this by hiding plenty of enemies behind crates or obscuring them with large obstacles.

The graphics in Project Titan aren't incredibly stunning, but they do the trick. The characters look a bit blocky, and there isn't a whole lot of variety between the different character types. The environments look good enough, but some of the textures don't look too hot under close scrutiny. Most of the animations in the game look very good, and characters who leap down stairs and dive over couches and end tables look particularly convincing. Still, when compared with games like House of the Dead or even Confidential Mission, Time Crisis looks extremely dated. The game has much of the same sound effects from the original Time Crisis game--enemies yell things like, "Get him!" or "There he is!" as they shoot at you. The game does feature fully voiced dialogue in the cutscenes, and it has some hysterically funny lines.

Time Crisis: Project Titan doesn't stray too far from the formula of the original game. And though the solid gameplay will definitely attract die-hard fans, the lack of further innovation, the dated technology of the PlayStation, and the fact that it's difficult to find a new GunCon reduce the likelihood that this game will attract new fans to the series. Project Titan hits store shelves on June 15. 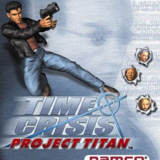