We fly through time blasting blimps and dogfighting with biplanes in Time Ace, the newly announced flight combat game for the Nintendo DS.

Time travel and aerial combat sound like one heck of a winning combination. At least, that's what Konami would have you believe. At a recent press event, the publisher announced a promising new game called Time Ace, which has you flying through time in an attempt to rewrite history. It's an interesting concept that dresses up a straightforward action-intensive aerial shooter. We played one of the early levels from the game to get an idea of how Time Ace will put a spin on action-intensive aerial combat games.

The premise of Time Ace is a sort of homage to Konami's classic Time Pilot, albeit with a more developed plot. Dr. Hugo Clock (get it, clock, time, ha!) develops a time machine way back in 1914 and travels to the future to get a glimpse of the fate of humankind. After finding out about World War I, Dr. Clock takes it upon himself to go back to his own era and do whatever it takes to prevent the war from happening. Unfortunately, Dr. Clock's assistant, Dr. Klaus Scythe, has his own agenda. Scythe steals the time machine and heads for the future in an attempt to gather all of the world's most powerful weapons so that he can amass a powerful arsenal and take over the world. Fortunately, Dr. Clock has a backup time machine that he uses to pursue Dr. Scythe through time to put a stop to the madman's heinous scheme.

Instead of going back in time to kill Scythe's mother (hey, that would just be too easy...and maybe a little too mean), you have to visit nine different eras and fly your way through 19 different treacherous levels in pursuit of Scythe. You start off flying a biplane and progress through time, eventually flying a fighter jet and even futuristic spacecraft. We were only able to try out the biplane, but apparently all of the planes will handle quite differently. The biplane that we flew felt somewhat sluggish, but it was well suited to the design of the level. The plane featured machine guns, rockets, and a turbo boost, so it was definitely well equipped to hold its own against the fleets of zeppelins and other biplanes that we fought.

Of course, a game about time travel is bound to have some fantastical trappings, and Time Ace doesn't skimp in that department. While some levels have themes that are grounded in reality, such as World War II and Vietnam, others are less confined by the bounds of reality. In one level you fly around Atlantis, except the fabled sunken island is instead floating in the sky. In the level we played, we were in a fairly open, rugged mesa environment punctuated by a few large rock formations. We started out chasing down a locomotive, trailing behind it and picking off the boxcars one by one until we eventually blew up the engine. After that, the wily Dr. Scythe boarded a bomber, and we continued our pursuit, all the while shooting down planes, blimps, and other peripheral targets. Eventually we encountered a massive fortress, and the game switched from a rail shooter to a free-roaming format as we flew around the structure blowing up cannons and shooting down enemies.

Most of the game is on rails, with narrow, invisible walls gently nudging you in the proper direction. However, in certain areas you can roam freely as you combat the game's many bosses and minibosses. When fighting the fortress in the first level that we played, we attempted to fly around and explore, only to crash into invisible walls and die without warning. Despite the confined structure, we enjoyed the simple, intuitive flight controls and the way the mission objectives varied throughout the level.

All of the action takes place on the top screen, with the bottom screen being used primarily to display your radar. On the bottom screen there are also three icons, which you can touch to activate different power-ups, such as shields, screen-clearing explosives, and speed boosts. You have to collect these power-ups throughout the level, but in the level we played, the power-ups were plentiful and easily obtained. The controls are easy and intuitive. You control the plane with the D pad and use the face buttons to fire machine guns and missiles and to speed up or slow down. The shoulder buttons are used to perform evasive barrel rolls in either direction.

Time Ace looks good based on what we saw of the game. The planes are nicely detailed, and the environments are large and full of destructible objects. We did notice that the draw distance was somewhat short, so planes and large structures tend to pop up out of nowhere as you approach them. We also noticed a significant drop in frame rate when battling the huge fortress, but hopefully those issues will be smoothed out before the game is released.

With Star Fox Command being the lone competition at this point, Time Ace should be a welcome addition to the Nintendo DS library of games. The time-traveling premise should provide for plenty of variety in the single-player game, and although we don't know much about it, we do know there will be multiplayer modes for up to four players. The multicard, local multiplayer will let you dogfight and race against your friends in a variety of planes and stages. We'll bring you more details on both the single- and multiplayer modes in Time Ace before the game ships this spring. Be sure to check out the first batch of screenshots from this game, and stay tuned to the gamespace for further updates. 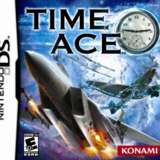