EA's upcoming browser-based golf sim looks promising, as we found out when we played nine holes at St. Andrews.

Fancy a quick round of golf during lunchtime, a train journey, or a board meeting? Then, as long as you have an Internet connection, Tiger Woods PGA Tour Online could be the game for you. We got to take another look at the game at EA's Winter Showcase event, which took place recently in London.

Last time we saw Tiger Woods Online, it wasn't clear what courses would be available in the finished version. However, this time, we had five to choose from: Pebble Beach Golf Links, TPC at Sawgrass, Sheshan Golf and Country Club, St. Andrews Links, and Wolf Creek Golf Club. We dusted off the clubs for a nine-hole game at St. Andrews and were impressed with how it looked. The famed "home of golf" looked great, and, in general, the game boasts graphics way beyond what you'd expect from a game played in a browser. In addition to highly detailed greens, bunkers, and lakes, there are some great draw distances on the surrounding areas that definitely make it easier to see what you're aiming for at the opposite end of the fairway. Unfortunately, there were also some realistic-looking storm clouds looming overhead, but they certainly added to the authenticity. PGA Tour Online offers three-click and true-swing control options--the same control scheme from other games in the series on the PC. Before long, we were slicing, chipping, and putting our way to a semi-respectable score on this challenging course. St. Andrews isn't known as a forgiving location, so we found ourselves fighting the elements and some worryingly large bunkers to come in on par.

Before you jump into a match, you can choose from a variety of options, including course settings, such as the hardness and speed of the green, as well as the wind factor. You can also create your own player, earn money and reputation, or play as Tiger Woods for fun. There weren't any other PGA golfers to choose from, but we're hoping more will appear in the finished game. You can earn money by performing a variety of feats, which include driving the ball more than 500 yards, hitting the green under par, scoring your first birdie, and putting the ball into the hole from a distance of more than 10 feet. You can then use your prize money to purchase new equipment in the pro shop, including headwear, shirts, suits, clubs, and balls. This aspect of the game is addictive and should offer a reward for coming back to the game again and again.

It may be Web-based, but PGA Tour Online looks like it will offer all of the polish we've come to expect from EA Sports games. It's full of flourishes, such as flyover introductions to each hole, as well as fellow golfers playing in the background. An audio commentary was noticeably lacking, as was any real crowd atmosphere, but we were greeted by applause for completing a hole. The developers are staying quiet about the payment model, but we were told options are being considered that include a subscription-based plan and a pay-per-round option.

Tiger Woods PGA Tour Online is being developed exclusively for the PC and has yet to receive a firm release date. For more information on this new direction to the franchise, check out our previous coverage. 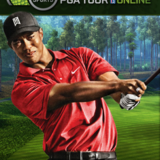