As the sun also rises, so has EA returned for another year with its annualized Tiger Woods PGA Tour golf simulator. This year's installment will arrive for the Xbox 360, PlayStation 3, PlayStation 2, PSP, and Wii on June 16. 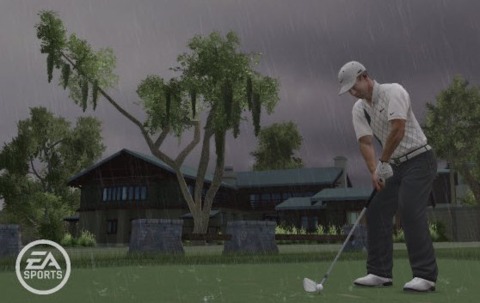 EA's Tiburon studio continues to refine its formula with Tiger Woods PGA Tour 10, adding in a number of new features and gameplay tweaks with this year's installment. Namely, the golf sim will for the first time include the US Open, a USGA championship, and the USGA's Rules of Golf. Bethpage State Park, which serves as the 2009 US Open course, will also be on prominent display in the Xbox 360, PS3, PSP, and Wii editions of the game.

As for the gameplay itself, EA said that it has added real-time weather effects to each course that correspond to current conditions on the real-world holes. Crowds will also play a larger role in PGA Tour 10, with EA saying that each hole will feature a larger assembly of spectators. The publisher also noted that ESPN's Scott Van Pelt and the Golf Channel's Kelly Tilghman will provide in-game commentary.