We hit the links with Wii Remote in hand to see if we can swing like Tiger.

The Tiger Woods golf games from EA Sports have always let you step into the shoes of one of the world's greatest golfers, regardless of your skill with a real club. But now that the game is showing up on the Wii, you can't hide behind your analog stick anymore. Instead, you actually have to pick up a remote and swing it like you would a real golf club. No matter how good your in-game stats are, there's no compensating for an ugly swing. So it's time to start practicing your follow-through, because Tiger Woods PGA Tour 07 is going to put your swing to the test.

We recently grabbed a Wii Remote and played a few holes of Tiger Woods 07. The game, of course, uses the motion-sensing capabilities of the Wii Remote to translate your real-life swing into an onscreen stroke. Before taking your shot, you can hit the minus button to step off the ball and take a practice swing. We found this to be a very helpful feature for getting a feel of just how hard you need to swing to put the ball where you want it to go. After you've taken enough practice swings, you can press the minus button again to square up to the ball. From here, you simply pull the Wii Remote back and then swing it forward like you would with a golf club. While the ball is in the air, you can shake the remote while holding a direction on the D pad to put spin on the ball. The button-mashing power boost has been removed and is instead incorporated into the swing. As a result, you can perform a moderate swing to get 100 percent power, but if you swing extra hard, you can get a boost all the way up to 110 percent power.

Earning those eagles and birdies isn't quite as simple as just swinging the remote, though. You have to be careful of how you hold the remote when you swing. For a straight shot, you'll want to hold the remote so the buttons are facing up toward you, but if you want to put a draw or a fade on the ball, you can tilt the remote left or right while swinging. If you intend to curve your shot around obstacles, this can be quite useful, but it can also cause problems if you do it unintentionally. We noticed that when we got too hasty with our swing, it was easy to slice or shank the ball off into the deep rough or into a bunker.

Putting is slightly more delicate, because you're dealing in measurements of inches rather than yards. You can adjust your aim with the D pad and take all the practice swings that you need. Once you're ready, you simply pull back the remote a short distance (less than a foot for most putts) and then swing it forward. The putting takes a bit more getting used to than the approach and tee shots, but we were able to sink some 20- and 30-foot putts without much difficulty. Of course, we were playing on some of the more forgiving greens the game has to offer.

Despite the subtle nuances of the swing in Tiger Woods 07, we found it to be relatively easy. The version we were playing was understandably running on a lower difficulty setting to allow newcomers to get used to the basic mechanics, but we found that we were able to sink eagles and birdies within just a few minutes of picking up the remote. There is an option to adjust the difficulty in the game, though, so if you're looking for a break or a steeper challenge, you'll be able to find it.

The True-Aiming circle that debuted in other versions of Tiger Woods 07 returns on the Wii, but this time you can use the remote to drag and drop the circle wherever you want it to go. You simply hold the A button to zoom down the course to where the aiming circle is and then point the remote at the TV to get a small hand to appear. You can then use that hand to "pick up" the circle and place it where you want it. In our experience the drag-and-drop aiming wasn't especially interesting, and if anything, felt slightly more cumbersome than simply moving the aiming circle with the D pad.

Included in this version of Tiger Woods 07 are 18 different courses and 35 golfers. You'll see famous PGA courses such as Pebble Beach and St. Andrews, as well as a handful of fantasy courses. The game modes include the traditional Tiger Challenge, as well as a PGA Tour season, a quickplay mode, and a practice mode. In addition, there are some familiar minigames such as the target shoot, where you try to land the ball on a number of targets of varying difficulty, and the skills 18, which has you trying to shoot through colored rings on the course. The green rings are easy to hit and get you a small amount of points, while the yellow and red rings are progressively more difficult to hit but award more points. There's certainly plenty of golf in this game to keep you busy, but you don't have to play by yourself. While there is no online multiplayer, you can get a group of friends together for some four-player multiplayer. Just be careful not to stand behind someone who's about to tee off or you're liable to get a face full of Wii Remote.

The visuals are impressive in Tiger Woods PGA Tour 07 on the Wii. The courses all look good, with plenty of detail in the surroundings as well as in the greens, fairways, and bunkers. The characters look lifelike and animate smoothly, as well. The game does support 480p resolution and widescreen, for enhanced picture quality. As for the sound, you can expect to hear David Feherty and Gary McCord returning once again to provide the commentary. To further enhance the feel of your swing, you'll hear an impact sound emit from the speaker in the Wii Remote when your club strikes the ball.

Tiger Woods PGA Tour 07 is scheduled to come out for the Wii in March of this year. Based on what we played of the game, it seems like it will offer the deep game of golf that the Tiger Woods series is known for, but will offer a much different style of play. In the meantime, start practicing your swing and keep checking back here for further updates. 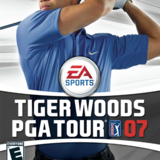