Three more 360 games are now playable on Xbox One.

Headlining the newest backwards compatible titles is Vanquish, Platinum's stylish, fast-paced third-person shooter. Joining it is Lara Croft and the Guardian of Light, the co-op Tomb Raider spin-off released for Xbox Live Arcade in 2010. Rounding out the batch is Brave, the video game adaptation of the Disney/Pixar film of the same name. The latter is also one of March's free Games with Gold titles for Xbox Live Gold subscribers.

Now Playing: Why Do People Love Vanquish So Much?

As usual, if you own a physical copy of any of these titles, you can now pop the disc into your Xbox One and start playing. If you happen to own any of the games digitally, it will automatically appear in the Ready to Download area of the My Games and Apps section. You can also purchase any of the backwards compatible games from the Xbox Store, though unlike last week's additions, none are included in the latest selection of Xbox game deals.

As previously mentioned, Brave is one of the four free Games with Gold available in March. Xbox Live Gold members will also be able to download Trials of the Blood Dragon, the inventive time-manipulating shooter Superhot, and the first-person puzzle game Quantum Conundrum next month. 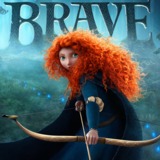