Shadowrun and a pair of Xbox Live Arcade games--Space Ark and Shotest Shogi--can all now be played on Xbox One. If you own digital copies of any of the three, you'll find them in your Ready to Download list. Alternatively, you can pop in a game disc to play Shadowrun.

If you don't own them, all three are available for purchase from the Xbox Store. Shadowrun goes for $15, while the other two cost $10 each.

Although it didn't turn out to be an especially good game, Shadowrun was noteworthy at the time of its release for offering cross-play between the Xbox 360 and PC versions. It's an FPS take on the classic RPG series, which has since seen a revival on PC from developer Harebrained Schemes.

Other recent additions to the backwards compatibility list have included Oblivion and Injustice. 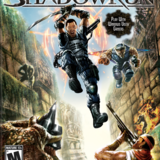