Who Was There: THQ Digital's creative director Don Whiteford, who works at the company's Warrington office in the north of England. Prior to restructuring under the publisher, the studio was called Juice Games and was responsible for titles such as Juiced and Juiced 2: Hot Import Nights. As part of THQ Digital, the studio now works alongside other studios in Phoenix and Agoura in the USA and develops titles exclusively for online distribution.

What He Talked About: Whiteford's talk was titled "Rethinking a Studio for the Digital Space," with eight lessons for developers thinking of adopting a digital strategy. The seminar focused on juggling multiple projects and continual experimentation. "By the time you start one [game], you've got to figure out what your next two or three are," he said, adding, "we're subscribing to the fail fast model," in terms of trying new things.

However, the highlight of the session was the confirmation of a new Red Faction game, which the studio is working on, called Red Faction: Battlegrounds. The news confirmed rumours that were circling last week that THQ was prepping a downloadable title in the series. The new game will launch on Xbox Live Arcade and the PlayStation Network, although no release date was given by Whiteford. However, he did show a video of an isometric arena combat game featuring mechs, tanks, and rovers. Whiteford also confirmed that the game will support local four-player games on the same screen and unlockable items for Red Faction: Armageddon.

While Red Faction: Battlegrounds may have been given the green light, Whiteford reminisced about titles from the studio that never saw the light of day. Split Shift was a racing game that aimed to push into the social space so that players could post challenges online. He also showed a trailer for Stormbirds, a "third-person shooter in the sky," and claimed that for the same price as the short CGI clip, the studio could have made an entire iPhone app. "We decided to start looking at some of the smaller channels […] our main focus is PSN, XBLA, Steam, and we're looking at the iPad," he said.

Whiteford also talked about the prototyping process at the studio, by which everyone in the company can submit game designs. "We've had ideas markets, where people come and pitch their ideas. We included everyone; admin staff as well," he boasted. It was this process that led to the studio building a PlayStation Move-like device at the same time Sony was doing the same thing. "No disrespect to the Sony designers, but it was quite easy to mock up [a Move controller]," he joked.

Takeaway: After a couple of abandoned projects, the THQ Digital Warrington team is now working on Red Faction: Battlegrounds for release on the PSN and XBLA. It will feed into Red Faction: Armageddon by offering unlockable items for the retail title. 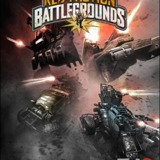