Although Life Is Strange and Remember Me developer Dontnod is not yet ready to share more gameplay footage from its upcoming vampire-themed game, Vampyr, the studio has now shared more details about the RPG's art and backstory. GameSpot spoke with narrative director Stéphane Beauverger, art director Grégory Szucs, and game director Philippe Moreau to learn as much as we could about the exciting-looking Xbox One, PlayStation 4, and PC game that's due to launch in 2017.

Announced earlier this year, Vampyr is set in a 1918 Britain, which is in the grips of a lethal Spanish flu. You play as Jonathan E. Reid, a military surgeon who returns from war and becomes a vampire. But that's just the start.

Our interview covers Vampyr's time period and setting, its art style and inspirations, and how the game aims to highlight the "struggling duality" of being a vampire. The developer wants players to feel the weight of how killing innocent people to survive is the price of being immortal.

Dontnod also talks about what it learned from making an episodic game in Life Is Strange and confirms that Vampyr will not be released that way. Instead, it will follow the traditional model and will be published by Focus Home Interactive; Square Enix handled Life Is Strange.

Also in our interview, Dontnod says the vampire genre, which has spawned a ton of movies and TV shows, is actually "underexplored" in games and has "plenty of untapped potential."

Check out GameSpot's full interview with the Dontnod developers below to learn lots more.

What drew you to the 1918 flu pandemic in Britain as inspiration for this game's time period and setting?

Stéphane Beauverger: Since we wanted to tell a gothic story about vampires, many things drew us to this particular setting. I guess it has a lot to do with the combined tragedy of the closing first world war, and the awful Spanish Flu epidemic, but also with the fact that this is a time of great political and social revolution. Great scientific and medical discoveries, but also great violence and despair. Old superstitions are becoming less socially relevant as human knowledge expands due to major scientific milestones, particularly religious belief under the spotlight of Darwinism. So for us, this is a perfect time to tell a story about a scientist and surgeon, turned into a vampire, forced to apply his rational beliefs on ageless supernatural forces like the vampires in the grim city of London. There are many societal juxapositions that add to the atmosphere of the narrative.

We haven't seen much of Vampyr outside of the brief teaser and some images; how would you describe the art style you're going for and what are your influences?

Grégory Szucs: We've created a dark and brutal world, realized with state-of-the-art lighting, post processes and an Impressionistic twist. The paintings of Phil Hale were definitely an inspiration, for their haunting mood and beautifully sculpted renderings of their figures.

What more can you tell us about Jonathan Reid, the high-ranking military surgeon who becomes a vampire. How did that happen and what are the consequences?

Beauverger: Jonathan E. Reid is a brilliant doctor who served during the war and became familiar with a brand new blood transfusion technique that's saved many lives. When the game begins, he's just returned from the war, waking up after an attack by a mysterious assailant. This attack was the cause of his transformation into a vampire. We can't reveal all of the consequences but his status as a specialist of human blood is of interest to the vampire society that hides in the shadows.

"As a doctor, the hero will be asked to save lives, but as a vampire, he will be driven to take some" -- Beauverger

How does the flu outbreak, and the fallout surrounding it, factor into and affect the story?

Beauverger: We can't give you all the details about the story, but the epidemic will play a major part in the story. The Spanish Flu is still considered as the most lethal epidemic in mankind's history--even deadlier than the black plague. It affects everyone and everything throughout the game. As a doctor, the hero will be asked to save lives, but as a vampire, he will be driven to take some.

Vampyr obviously isn't the first vampire-themed game. What are some of the team's favorite vampire games and in what ways does Vampyr expand on the idea of being a vampire and take it in a new/different direction?

Philippe Moreau: There are certainly tons of vampire-themed movies and TV shows, but I felt that there was plenty of untapped potential for the theme to be explored in gaming. Of course, legendary examples such as Vampire: The Masquerade and Castlevania explore the theme masterfully, but I really think the universe and mythos remains underexplored.

We want to go back to the Gothic roots of Vampire mythology and emphasize their struggling duality: killing innocent people to survive is the price of immortality… So if you, as a player, were a vampire, how would you handle that choice? Less glitter, more grit.

Does working within the confines of a real event put any limitations on what you can do creatively? Or do you see that more of an opportunity to provide a new take on the subject?

Moreau: On the contrary, we chose a setting and time period that provided us a really rich narrative context. In the addition of the supernatural Vampiric layer, we are able to bring our own very darkly mysterious and atmospheric version of London, 1918.

What kind of research did you do for this project specifically--about vampires and early 20th century Britain and the flu? How deep did you dive into the history of the world you're building?

Beauverger: We did a lot of research about the historical setting of the catastrophic flu, but also about medical and scientific progress during the war, to lend authenticity to the feeling of the situation at the time. The authorities hardly coped with the situation, there were just too many corpses to be dealt with, and civilians mostly were left to themselves. It is also important to notice that, because of the ongoing war, the government did not want to alarm the population and communicated very little about the epidemic. All of this will be shown in our version of a grim London, throughout events and general background. And, of course, we also did a lot of research about vampire mythology, to create a unique but relatable lore.

In what ways does working exclusively with current-generation consoles instead of supporting two console generations, as you did most recently with Life Is Strange, allow you to push things forward in terms of art and overall world-building?

Szucs: It raises the threshold for the 'lowest common denominator' platform. We no longer have to worry about how it will translate down to last generation hardware, letting us focus on getting the best out of Unreal 4 for today's machines.

Dontnod's body of work has been very varied, in terms of subject matter, presentation, and gameplay. Is there a common thread that ties all your games together?

Moreau: Each time we start a new project at Dontnod, we go through the same process. A core team is built and asked to develop the big picture. We work to give each project the art direction, gameplay and narrative which best serves the theme of the project. Since it is not always the same people managing this core team, the direction of each project is strongly influenced by the people in charge of its conception.

The episodic formula for Life Is Strange was a unique approach; what did you learn from that experience, and can we expect Vampyr to follow the same format?

Moreau: Releasing an episodic title was an interesting experience for us. It created a bridge between players and developers that persisted throughout the development process. It allowed us to react to player feedback quickly and improve the content of the game as it progressed. The format fits well when the game was written like a TV show from the start.

In contrast, Vampyr is a full game production. We've always known that we wanted open level design with a large amount of possibilities in term of actions and consequences--it had to be developed as a traditional game. 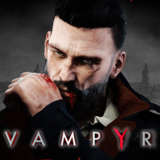