Unless you've got a spare $50,000 lying around, owning a DeLorean is unlikely. The iconic--and kind of terrible--car earned a place in pop culture history as a time travel machine in Back To The Future, and now you can at least own a scale replica of it. Hot Toys will finally be manufacturing a sixth-scale version of Back To The Future's enduring ride, which can be posed in either its standard terrestrial mode or you can flip the wheels up and place it on a stand if you're not a fan of roads. Originally only seen in its prototype form at conventions, production is finally kicking off on this long-requested collectible.

The DeLorean time machine is suitably massive as well, as it's over 28 inches long and has an impressive number of film-accurate details in its design. There are various LED light-up points on the exterior design and interior controls, signature gull-wing doors, the aforementioned foldable wheels for flight-hover mode, cable wires across the exterior structure, and a flux capacitator that looks like it can generate 1.21 gigawatts of electricity.

Find a steep hill in your neighborhood, and it can probably hit 88mph… once.

Lastly, there's a stand included that can be used to prop the DeLorean up if you're looking to display it in hover-mode. As for extras, Hot Toys also has several versions of Marty McFly and Doc Brown in production. Right now, you can grab McFly and Doc Brown in their original threads, or you can preorder them in their Back To The Future 3 wild west outfits. You can find the DeLorean over at Sideshow Collectibles, where it's priced at $825 and will be arriving in Q3 2023.

Interestingly, the DeLorean appears to be making a comeback. During the Superbowl, a teaser for a new version of the car was shown off. According to GameSpot's sister site CNET, this latest take on the DeLorean is being manufactured by the VW-owned Italdesign. 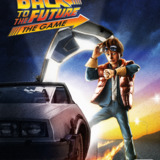 View Comments (2)
Back to the Future: The Game