This Cyberpunk Noir Game Is "Perfect Garbage," And We Can't Wait To Play It

In Love Shore, you can play through two different routes, and each one will inform the other. 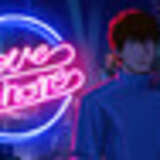 Love Shore, a cyberpunk noir visual novel, is the debut title of developer Perfect Garbage--which, in it of itself, is a wonderful name for a studio. "Essentially, we were brainstorming with our other co-founder, [art design director] Kabo, who is sort of our head, and we were joking around," narrative director Emmett Nahil told me. "And I think [studio director] Son [M.] said, 'We just make garbage. It's all we do, we make garbage,' and Kabo goes, 'Yeah, but it's perfect garbage.'"

It's an amusing origin for a studio that's making a game I'm so excited to play. Love Shore takes place in a future metropolis inhabited by both humans and old gods. When the city faces a fertility crisis, a biotech firm steps in, creating fully-formed human beings composed of cybernetic parts save for their biological brains. These cyborgs are called S.Humans, but the company only managed to build 100 before going bankrupt--turns out parents would rather conceive and raise biological offspring that grow naturally than continue to pay for the upkeep of artificial children.

Quite a few games set in cyberpunk or cyberpunk-inspired worlds are scheduled to release in 2021--Anno: Mutationem, The Ascent, Jack Move, and Solace State, among others--but Love Shore stands out due to its approach to storytelling. It stars two different protagonists, Farah and Sam, whose wholly separate journeys through the same city intersect in both foreseen and unforeseen ways, influencing one another. It's a bit like Claire and Leon in Resident Evil 2.

"We felt we could do a lot more narratively with two distinct storylines, with two completely distinct individuals that were prebuilt, have their own wants, needs, and desires in the context of the world," Nahil explained. While he primarily wrote Farah's route through the game, Son M. covered Sam's route.

"But we are in constant communication with one another, if only to make sure that we are being cohesive," Son added. "Because the cool thing about Love Shore is that all of the narratives intertwine--they're all happening at the same time, even whether or not you engage with [them]. And to make sure that continuity is carried in every route, we are in constant communication like, 'Where's your character at this point on this day? What are they doing?'"

This gives players a wonderful incentive to play Love Shore multiple times--beyond the eight different companions to befriend (or romance and smooch) and over 25 possible endings. You might gain a whole new understanding of certain revelations in Farah's route after playing through Sam's and vice versa, which could inform how you interact with certain characters or choose to react to specific events in subsequent playthroughs. Sam and Farah cross paths at certain points in their respective stories as well, so playing through both routes allows you to see certain scenes from a different point of view.

"The cast crossover as well," Nahil adds. "So if you're in Sam's route, you're still going to meet a lot of the companion characters from Farah's route too. It's all one world. You're constantly interacting with the other half of the cast."

Both Nahil and Son were quick to correct me when I referred to the extended cast of main characters as "romance interests." Love Shore treats its diverse cast of eye candy as companions, not potential lovers. True, this is a visual novel with a focus on relationships and love, but those feelings don't have to strictly be romantic or sexual. You can pursue friendships with these folks too if you prefer, or embrace pure chaotic energy and try to burn every bridge you have--the latter of which, I admit, is a path I am never brave enough to pursue in any game I play. "You and me both," Son laughed.

To that effect, Farah and Sam don't always feel like the main characters of Love Shore. Sure, they're who you play as, but the world of Love Shore seems to revolve around the companion characters. Son explained that you're basically walking into their stories following Farah and Sam's release from prison--and that's definitely how Love Shore's free demo (available on Steam) made me feel. Farah is quickly drawn into the search for Imani, a scientist that stumbles upon a dangerous secret, while Sam finds himself aiding Alyosha, a man who supposedly died 100 years prior to the start of the game. If anything, the demo made it feel like Love Shore was Imani and Alyosha's story, with Farah and Sam acting as the common thread between the two.

"We went in saying that every character has their own life happening," Son said. "We call [the other main characters] 'companions' for shorthand, but oftentimes Farah or Sam are the companion to them, to what's happening in their lives. What's cool about Love Shore is that every character is completely fleshed out and they have their own lives and their own perspectives on what's going on. And they might not often agree with you, so how you play and how you choose to engage with them--whether you become lenient with Farah's beliefs, or you end up becoming more strict at a certain point with Sam--can really shape the relationship with who you're with."

Nahil added that the team knows that players will try to navigate Love Shore in order to try and get closer to the character of their choice, consequences be damned--perhaps deciding who to befriend or romance before even booting up the game. Perfect Garbage is planning for that, aiming to subvert player expectations to tell more satisfying stories. "That's one of the things that we really enjoy doing as drama writers," he said. "We have all this latitude to play with people's perceptions and what they think visual novel characters are going to be like versus what their perception of the literary genre is."

That subversion may come through in the makeup of Love Shore's cast; the companions are a diverse group in terms of gender, sexuality, and race, and both Farah and Sam are brown and queer as well. It's refreshing to see a game put queer folks and people of color front and center, especially in a genre like cyberpunk where they're, more often than not, tokenized or used as the set dressing to convey otherness or poverty.

"We are a very narrative-driven studio, we really value storytelling, and our main goal is putting marginalized characters with backgrounds like us at the forefront of these stories," Son said. We're trying to write people like us into genres and settings that we love and we enjoy, but don't often get to see ourselves in. We joked when making Love Shore that we never see a brown cyberpunk main character, despite the genre often utilizing the marginalized experience."

And that's part of why I'm excited to play Love Shore. If the demo is any indication, Farah and Sam aren't marginalized because they're brown and queer; they face a daily social stigma becase they're S.Humans. They just also happen to be brown and queer. And, importantly, this doesn't seem to be Perfect Garbage's attempt to clean its developers' hands of tackling storylines and themes related to real-world discrimination. It's the opposite actually. Perfect Garbage is composed of queer folks and people of color--these developers know the marginalized experience. And by shifting the focus of Love Shore so that it gets at the heart of the stigma aimed at a made-up group of people, Perfect Garbage can explore that experience without tokenizing it.

There's a real sense that this society views S.Humans more as property, someone to be owned and controlled before being discarded, as they are somehow less human by nature of their creation. For example, when jailed, Farah and Sam aren't kept in the normal lock-up like the human prisoners--they are instead forced into a state akin to sleep paralysis, fully conscious but having no agency over their body. This lack of agency is extended even further in the first chapter of Sam's route, when we learn that S.Humans don't actually age--all of them began as children that their parents upgraded with new parts at designated points in their lives in order to appear older. But with the company responsible for the creation of these parts now gone, all S.Humans are perpetually stuck looking like whatever age they managed to reach. Sam, for instance, is over 30 years old, but he still looks to be in his late teens or early 20s, and he'll always be perceived that way. Dysphoria is a major theme of the first chapter of his route as a result; it's Love Shore relying on a fictional lens in a fictional setting to focus on and explore a real-world issue. This allows characters like Conrad, a transgender man and one of the main companions in Sam's route, to just be a character in the story, as opposed to the whole of his identity solely being tied to the struggles of being trans.

Nahil explains that this is also why Love Shore is a visual novel, beyond the very matter-of-fact logistical reasoning that this genre is more approachable and affordable to make for a small indie team in comparison to, say, a 40-hour open-world RPG. With the format of a visual novel, the player is encouraged to take in details at a slower pace--clicking through still images and reading through every conversation before making a choice. The game asks you to pay attention to every little detail in order to make informed decisions, especially since the knowledge you glean from one protagonist's route will provide context for the other. There's no binary morality system in Love Shore either--your actions simply have consequences, and whether you think they're good or bad is up to you.

"We really want it to be personality and perspective [based] decisions that are happening and not choices dependent on moods or like, 'Am I an asshole if I pick this one? Or is this what Farah would say building up to this moment?'" Son said. "We hope that [the consequences] fluctuate in their complexity and that you're surprised when you get a certain ending."

Love Shore is one of 50 indie games you should keep an eye on in 2021; Perfect Garbage's visual novel is currently scheduled to launch for PC in October this year. But that won't be the last we hear of Perfect Garbage--the developer has already begun brainstorming for its sophomore effort, which, according to Son, will have a creepier vibe. "We are big horror fans," they said. "And it's funny because we all like different types of horror and that really comes through too."