Diddy Kong Racing Adventures was not meant to be.

As you'll see, Adventures was pitched as something of a combination between a racing game and an adventure game. After being defeated in Diddy Kong Racing, the evil Wizpig wants revenge, so he sends his Kremlings to Diddy's Kongo Island to bulldoze the area, in turn creating race courses. Diddy would have recruited his pals from the first game to go up against Wizpig to reclaim the island.

In terms of vehicles, Adventures would have included quad-bikes, planes, jet skis, and hover scooters. There were also plans for vehicle upgrades and customization options. Unique to the game would have been a pretty cool-sounding feature where your character could move positions on a vehicle using the C-stick. Another planned feature was the ability to leap onto another vehicle mid-race.

The game was also going to have multiplayer support for up to four players via split-screen, while players could also adjust the time of day and weather. Note that what's in the video above--Diddy riding a rhino--is only a tech demonstration for how the game and some of its systems would have worked.

Adventures was pitched in 2004 with an aim to put the game on GameCube (though this video is of an Xbox version). There is no word on why Nintendo declined to greenlight the game.

Would you like to see a new Diddy Kong Racing game? Let us know in the comments below! 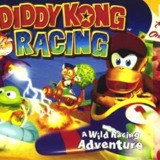