Games are getting bigger and bigger these days, from Final Fantasy VII Remake with its two Blu-ray discs of data to Call of Duty Modern Warfare's whopping 175GB file size. Naughty Dog's highly anticipated The Last of Us Part 2 will soon join the ranks of these massive games, as its file size is well over 100GB; in fact, it's the largest PlayStation exclusive released to date, according to GamesRadar, surpassing the file sizes of God of War, Horizon Zero Dawn, and more. With The Last of Us Part 2 and other big games like Cyberpunk 2077 releasing this year, it's a good idea to invest in an external hard drive that can instantly expand your PS4's storage capacity, and luckily, there's a great deal on one of our favorite game drives right now.

The WD 5TB Easystore portable external hard drive is on sale for $80 off at Best Buy right now, selling for $100 instead of its usual $180. This gets you WD's biggest hard drive with 5TB of extra game storage for just five bucks more than the 4TB version is selling for right now. 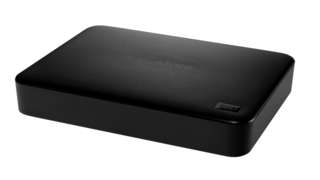 WD's hard drives are small enough to fit in the palm of your hand, making them easy to unplug and transport as needed. They can also be used to back up photos, videos, music, and documents, and they come equipped with software that can be set to run automatically on a schedule. This hard drive is fully compatible with not only PS4 but Xbox One and Windows PC and Mac as well, although a simple reformatting will be required--just plug it in and follow the steps in the Devices section under Settings.

While you're getting ready for the release of The Last of Us Part 2, be sure to check out our pre-order guide for more info on the game's pre-order bonuses, special editions, and merch. Sony recently announced a limited-edition PS4 Pro with a design inspired by The Last of Us Part 2, along with a matching controller, headset, and Seagate 2TB game drive.

View Comments (8)
The Last of Us Part II
PlayStation 4