Thirsty Suitors Mashes Up Turn-Based Flirting, Skateboarding, And Cooking, And It All Somehow Works

There's even a little bit of romance to be found in the game as well.

With a name like Thirsty Suitors, you'd be forgiven for thinking Outerloop Games' next title is a dating sim. But while dating (and romance) is a part of the game's story, Thirsty Suitors is largely about repairing broken relationships and coming to terms with the aftermath of a bad break-up. It's also a chance for Outerloop Games to tell a story about South Asian culture.

Thirsty Suitors sees you play as Jala, who is returning home after her most recent ex broke up with her. It's not an easy homecoming, as Jala must face the demands of her overbearing parents, find a way of peacefully reconciling with the numerous ex-boyfriends, girlfriends, and partners she's left behind, and prepare for her sister's wedding.

Such a story translates into an action-adventure game with turn-based combat that revolves around countering people's emotions and desires with arguments, wordplay, and flirty remarks--all encapsulated as over-the-top fighting moves. Beyond combat, Jala can get around via her skateboard and parkour moves, and try to impress her judgemental mom in action-packed cooking segments.

It's a hodgepodge of mechanics and features at first glance, all of which don't initially seem to belong in the same game. "It's a weird game because, I mean, the combat system is roughly Paper Mario: The Thousand-Year Door," creative director Chandana Ekanayake said during a Thirsty Suitors preview. "There's elements of Final Fantasy, there's elements of things like Persona and Yakuza--Dream Daddy even."

Ekanayake added that the team started with the turn-based battle system before then adding on the other mechanics to the game, such as the skateboarding-focused navigation and cooking. "Cooking is such a huge part of [South Asian] culture; we had to have that," Ekanayake said.

And I think that attention to Jala's culture is why Thirsty Suitors manages to look so cohesive despite its incorporation of such an expansive variety of gameplay inspirations. Everything is unified in the clear care and detail Outerloop Games has devoted to encapsulating Jala's culture--her life experiences act as a sort of glue for it all, unifying the diverse assortment of mechanics and features in a way that somehow, someway makes sense.

"We're exploring things with intergenerational trauma, family expectations, relationships, and inviting you to be a guest in our home, to show you our culture from our perspective and to embody this character, Jala, who might be unlike someone you know or played as before, but we feel like that's an exciting and scary part," Ekanayake said.

"Now, if you're from this culture, we hope the game resonates. And if you're not, we hope that you'll learn something new and have a good time. This project is both exciting and scary for us to make because of the pressure of telling a story from this perspective and the pressure of having to represent South Asian culture, that's not explored so much in games."

During the demo, Jala's return home kicked off with running into her ex-boyfriend from third grade. The conversation between the two played out as a turn-based battle with quick-time events. The battle conversation featured moments where Jala could decide how she wanted to talk back to her ex, ranging from insulting to flirty. These choices influenced the direction of the battle, initially sparking Jala's ex into professing his undying love for her before ultimately culminating in the two realizing that they'd work out better as friends. It looks like a creative and enjoyable way to explore two people working through their differences, symbolizing arguments as actual battles.

"It is Jala's story, so it's not a complete 'the player as an avatar' story," Ekanayake clarified. "But the choices that the player chooses for Jala will definitely affect the narrative in terms of what shows up later and the results of that later."

And those choices will, in turn, affect how the game ultimately concludes. "We keep track of small and big choices Jala makes," Ekanayake said. "And there's a relationship status with each of the suitors, and depending on all those things at the end, there's several possible endings with each of the suitors or with multiple suitors. I should say, [Thirsty Suitors] is not necessarily a dating game--it's a lot more about repairing relationships. But there is obviously some romance involved with a game called Thirsty Suitors."

It's an intriguing pitch, and one I'm excited to actually get my hands on at some point. Thirsty Suitors is a strange-looking game, but it looks a whole lot of fun too. And if the story manages to match the zany flavor of the combat, skateboarding, and dialogue choices, then I think Outerloop Games has something special here.

We'll just have to wait and see. Thirsty Suitors is scheduled to launch sometime this year for PC. 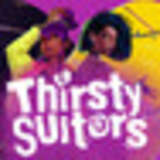