For the last several weeks, sleep has become an elusive thing for me. After the birth of my first child back in early September, my wife and I have been experiencing the familiar trial of all new parents--figuring out ways to get our daughter to sleep for more than two hours at a stretch...

For the last several weeks, sleep has become an elusive thing for me. After the birth of my first child back in early September, my wife and I have been experiencing the familiar trial of all new parents--figuring out ways to get our daughter to sleep for more than two hours at a stretch. We've had varying degrees of success but last night was particularly bad--the little one refused to sleep much at all, and the result was me standing in the middle of our bedroom for what seemed like a miniature eternity, gently rocking her and trying to get her to snooze while simultaneously trying to prevent myself from falling asleep standing up.

That miniature marathon of enforced insomnia came on the heels of an appointment I had yesterday afternoon with the fine folks at D3, who dropped by to show off Kamen Riders Dragon Knight for Nintendo Wii and DS. The game is based on a long running Japanese sci-fi television series, which seems to be a mix of an amped up version of Power Rangers and Yu-Gi-Oh-style card collecting with a healthy dose of cartoon violence. The game, and its complex backstory, turned out to be a heady mix, especially in my fragile mental state and, as I stood in the middle of my room last night rocking the baby to sleep, visions of the absurd costumes and hyperspeed action of the game came creeping uninvited back into my head.

So, here's a list of things I either noticed in Kamen Rider Dragon Knight or hallucinated in my sleep-deprived state:

Mirror World -- There are two worlds in the universe of Kamen Rider, the "real" earth and an alternate dimension known as Ventara. The evil General Xaviax is preparing to invade the real earth, and your goal in the game's story mode is to prevent that from happening by kicking all sorts of butt. Incidentally, I guessed the correct spelling of "Xaviax" the instant I first heard his name. After all, nothing is more devious than a bad guy with two X's in his name.

Ready… Fight! -- Kamen Rider is a fighting game, pure and simple. In story mode, you'll choose your favorite Rider and then progress through a grid of encounters leading up to a final battle against Xaviax. These fights can either be traditional one-on-one brawls as in games like Tekken or Soul Calibur or taking on multiple opponents in 3D brawls. There's also duel modes in both versions of the game, where you can pit various characters against one another.

All Hands on Deck -- It wouldn't be a kid's show without some sort of collectible card tie-in, right? In Kamen Rider, every combatant has a so-called Advent Deck of cards which offer him or her special powers in a fight. You have to build up energy to use your cards in combat but they do offer some cool powers like…

A Dude Became a Tank -- During one point in the game, one of the Kamen Rider fighters played a card in his deck that allowed him to become a tank. Or interface with a tank he had summoned from thin air. Or transform the front of his body into a tank. Something like that. Then the guy/tank nuked my character into oblivion with a 50-hit combo and explosive effects that would have looked like overkill in Mercenaries 2. It was at this point in the demo that I wearily turned to the friendly D3 representative and said, "I don't understand this game, culturally."

Up Yours! -- At one point, a triumphant Kamen Rider struck a victory pose that looked distinctly like he was telling me to go screw myself. I can only hope the gesture means something else entirely in Japan.

Kamen Rider Dragon Knight is coming for the Nintendo Wii and DS on December 22. 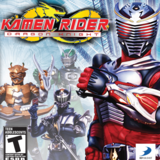