In just over two weeks you'll be able to virtually reenact the Ever Given incident.

In what seems to be incredibly serendipitous timing for the creator of a niche shipping canal game, Suez Canal Simulator is a thing that exists and is due to release within the next month--on April 20, to be exact. The game has appeared just after a grounded ship blocked the canal for roughly a week, causing global logistical delays and a flood of Suez Canal memes.

On March 23, the Ever Given container ship was grounded in the Suez Canal, bringing attention to the global shipping route in a big way. The canal was blocked for around a week while excavators and tugboats worked to free the ship from the sandy banks, resulting in a huge number of memes and even a mod for Microsoft Flight Simulator.

Now, the Suez Canal Simulator will allow you to re-enact a container ship's journey through the canal--whether you want to pull an Ever Given or prove how easy it is to traverse it properly. The simulator game boasts "600 kilometers of continuous uninterrupted ship tracks for hundreds of hours of enjoyment," according to its Steam description. "Travel in either direction North or South from 100 kilometers out in the Mediterranean Sea or the Red Sea through the 193-kilometer-long Suez Canal."

The game will provide plenty of play time for aspiring ship's captains, with a full journey taking "over 24 hours."

Not much can be found about the game or its developer prior to March this year, so it's unclear whether the Suez Canal Simulator is an ongoing project with fantastic timing, or whether the Ever Given crisis spurred its development.

An expansion called the Panama Canal Simulator is promised to arrive in August 2021, however, while the developer has put a call out for any enthusiasts who may want to help add "all the great ships that transit the Suez Canal" into the game as DLC, whether "for free or for a fee." 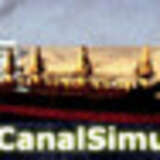