There's a New Dead Island, and This Time it's a Stealth Game

Is this the real life? Is this just fantasy?

This was Cliff Carlo's mantra throughout my demo of Escape Dead Island. Poor Carlo, the game's protagonist, has not been well ever since he washed up on a tropical, zombie-infested island in the Banoi archipelago. His entire reality is breaking down around him, to the point where Carlo and I are both having trouble separating fact from fiction. The result is a baffling narrative construct designed to keep you in orbit around a single, burning question: Is this real? The zombies are still a concern, sure, but the real battle in Escape Dead Island takes place inside your own mind.

Escape Dead Island joins publisher Deep Silver's growing stable of Dead Island games, including Dead Island 2, which was announced during Sony's E3 2014 press conference, and Dead Island: Epidemic, the MOBA currently in closed beta. Compared to the original Dead Island, Escape is defined more by what it lacks. There's less of an emphasis on combat, there are no role-playing elements or multiplayer modes, and your hero isn't immune to the zombie virus.

The result is a baffling narrative construct designed to keep you in orbit around a single, burning question: Is this real?

Because of this vulnerability, all of my zombie encounters required a touch of stealth to be successful. At one point, I was exploring an overrun office complex where any phone I approached would instantly start ringing (the game enjoyed throwing weird little curveballs like this). Gradually I figured out that I could use this to my advantage by triggering specific phones in order to lead zombies away. After that, I'd circle around and impale them through the skull with a screwdriver.

Of course, not every enemy encounter in the game will require such precision. Escape will have boss encounters. It will have special zombies. However, if you think you will be able to wrestle down a half-dozen infected with a lead pipe and a go-get-'em attitude, think again. Outside of combat, Escape features Metroid-style exploration. This means certain tools you collect--such as some rope or a club--will let you access previously inaccessible areas, though I was unable to get a sense of how much backtracking would be involved.

Toward the end of my demo, Escape decided to ratchet up the crazy. My entire goal up to that point had been to reach the beach and reunite with my companions. However, when I arrived at the beach, my companions were nowhere to be found. Instead, I was greeted by a hail of metal shipping containers that fell from the sky and (possibly) crushed my hero to death. In the next scene, I awoke inside a similar container on a makeshift bed. My companions insisted I had been unconscious since the shipwreck; however, I still retained all the items I had collected previously--a fact that unsettled both my hero and his companions.

With all this talk of insanity and sneak-attacking zombies, I would be remiss not to mention one of my favorite aspects of the Escape Dead Island demo: photography. That's right. Escape is taking a page from Dead Rising's book by letting you snap photos of your surroundings. These photos are one of the game's many collectables and are explained away as collecting evidence against those who engineered this outbreak. You can put your own inner shutterbug to work when Escape Dead Island is released later this year on the PlayStation 3 and Xbox 360, and digitally on PC. 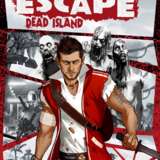