We have comparison shots from the last 20 years of Madden. See how the franchise has changed over the years!

To call Madden big is both an understatement and an overstatement. It's an understatement because the Madden brand is more powerful than any other in North American video gaming history; it represents the triumph of one of the industry's richest publishers, as well as the potency of good licensing. It's an overstatement because though John Madden is not a little guy, he would have to be 10 stories tall, stomping through New York City taking bites out of the Chrysler building and crushing taxis with his feet to be half the monster his video game franchise has become in the past 20 years.

That's right, with the release of Madden NFL 09, John Madden Football is turning 20. So what better time than the present to look back at all the things that made Madden Football one of the most powerful forces in gaming? Of course, 20 years is a long time, so rather than go too far in depth and provide a feature that might take two decades to read, we'll provide you with some striking sales figures, our signature Then and Now image comparisons, and a video outlining the series' greatest innovations.

But first, you can't talk about the brand without talking about the man. After all, back in the late '80s when Electronic Arts was first developing John Madden Football, it was Madden the man who insisted that the games had to be 11-on-11. According to Scott Orr, who oversaw Madden titles from 1992 to 2000 for EA, John Madden had a huge amount of input on what went into the games, taking their realism and authenticity very seriously. When we interviewed him recently, Mr. Orr told us that the design team would visit John Madden three or four times a year and that "Spending time with John was like a graduate course in football strategy and tactics...We made the game easy to play and fun; John made it the standard that it still is today."

Back in the '80s and early '90s, focus tests told a different story. According to Bing Gordon, the chief creative officer at EA, marketing research found that people were 30 percent more enthusiastic about the brand name "Electronic Arts Football," than "Madden." But EA stuck with its man, and now Madden is one of the most powerful brands in the world.

This is due in large part to the potency of another brand: the NFL. People don't think of Madden as licensed software in the same vein as Harry Potter or James Bond, yet its annually updated rosters full of real NFL players on real NFL teams are a big part of what makes the series irresistible to gridiron fanatics starved by the long summer months for their football fixes. John Madden Football picked up the NFL license in 1993, as well as the rights to NFL player names in 1994, and enjoyed a substantial increase in popularity. But the success of the series didn't go unnoticed, with several other publishers and developers attempting to cash in on the allure of the NFL to line their own pocketbooks with the sales from rival football games.

NFL Gameday and the NFL 2K series were Madden's chief competitors, the latter even going so far as to offer its final installment, ESPN NFL 2K5, for 20 dollars. With the power of ESPN's brand on its side, as well as a price tag half the size of Madden's, 2K looked like it might steal some of Madden's bacon. Then, in 2004, EA announced it had acquired the sole right to publish video games using NFL team and player names. Madden became the official video game of the NFL and utterly demolished its competition in one devastating power move.

The rest has been a recent history of analog stick tweaks, franchise options, licensed soundtracks, and massive, massive sales figures. According to EA, Madden has sold millions of copies. Take Madden NFL 08; to date, it has sold 6.7 million copies in North America. That's 1.4 million more than Halo 3, 2.2 million more than Grand Theft Auto IV, and 3.7 million more than Super Mario Galaxy. The only game that really trounces it is Grand Theft Auto San Andreas, which has sold 9.2 million copies. But Madden comes out every single year on platforms all across the industry. Using our own NPD data, we've been able to account for the sale of 40 million copies of Madden. We're only missing one minor detail: the entire 1990s. Fortunately, EA graciously filled in the gap; they claim to have sold 70 million copies, give or take a hundred thousand. Of course, when you get into numbers that large, everything loses perspective.

To weigh matters on a smaller scale, let's look at handheld games. Since 2001, The Advance Wars titles have been some of the most popular games to play on the go, selling approximately 1.2 million copies across four titles, averaging scores of 89/100. Madden, over the same period of time, has sold 1.1 million units across all handhelds. Wow, kind of impressive, huh? After all, Madden isn't exactly popular among portable gamers, yet it can hold its own with a truly respected franchise. Except for one thing: That 1.1 million figure isn't really Madden's overall handheld sales--it's just Game Boy Advance sales.

Even Madden's afterthoughts can sell a million copies. For even more perspective, let's look back through the years at Madden Then and Now.

1989--The beginning of John Madden Football on the Apple II, DOS and Commodore 64. We don't have screenshots of the game, but you can throw a bunch of Lego bricks onto a bright green carpet to make a passable representation.

1992--Though the Genesis and SNES versions were both called John Madden Football '93, the former was developed by Looking Glass Technology, while the latter was handled by EA. Now with taunting, stupid.

1993--This year marked the introduction of audibles, as well as the introduction of players who didn't understand how to use them. The franchise name also changed from John Madden Football to Madden NFL '94. Why? Because EA wrapped up the licensing rights to NFL teams. It also threw in a brand new mode called Season.

1996--Madden NFL 97 added more bells and whistles, including motion-capped animations, and got rid of the apostrophe in the title. This was also the year Madden came to the Sega Saturn and Sony PlayStation; however, the series' arrival on the latter system was overshadowed by the strong showing of Sony's own football franchise, NFL Gameday. It's true, once upon a time, Madden had competition.

1997--NFL Gameday went 3D on the PlayStation, while Madden accomplished the same feat on the Nintendo 64. Even though Madden 64 lacked the NFL license, many still felt it was the superior product, with better artificial intelligence and more varied options. Who will win this gridiron battle?! Is the suspense killing you?

1998--Madden NFL 99 was 3D on every system and NFL licensed. On top of that, EA unveiled the new Franchise mode, letting players transform their horribly mismanaged hometown teams into Super Bowl contenders.

1999--A slightly visible Barry Sanders on the cover foreshadowed the series' eventual switch to cover athletes. Otherwise, with more tweaks, options, and small features, Madden NFL 2000 was Madden as usual.

2000--This was a big year for Madden football, marking the series' first release on the brand spanking new Sony PlayStation 2, as well as the first box cover with an athlete on it: the Tennessee Titans' Eddie George. However, Madden NFL 2001 did not mark the beginning of the Madden curse, as George went on to have a good season.

2001--Madden NFL 2002 mostly added slight tweaks to the rock-solid foundation established in 2000 (and 1999, and 1998, and so on), but it was still an interesting year. Not only did the game come out for the new Xbox, but it also shipped on seven other systems, including the GBA and Game Boy Color. Most importantly, Dante Culpepper was featured on the cover. His career completely imploded after that, making him the first and one of the worst examples of the uncanny Madden curse.

2002--Madden NFL 2003 for the PS2 was the first Madden game playable online. Aside from that Sony exclusive feature, every version featured a greatly expanded soundtrack, including cuts from such bands as Bon Jovi, OK Go, and Good Charlotte. Marshall Faulk was the cover athlete and next victim of the young Madden curse; a bum ankle led to his worst season in at least five years.

2003--This year's version of Madden featured an impressive soundtrack, with contributions from OutKast, The Roots, blink-182, Jet, and AFI, as well as the less impressive ability to set hot dog prices. The new gimmick was called playmaker controls, which was best known for letting you quickly switch the direction of a play before the snap. The cover athlete was Michael Vick, who broke his leg almost immediately after Madden NFL 2004 hit store shelves.

2004--Madden NFL 2005 introduced the hit stick, which let players lay brutal tackles on ball carriers. EA, taking a cue from its own game, then went and applied a devastating hit to the competition by announcing that it had acquired the exclusive NFL license. That's like a boxer acquiring the exclusive rights to punching. The cover athlete, by the way, was Ray Lewis, but the Madden curse was too busy utterly devastating 2K Sports' football franchise to mess up his season much.

2005--Not one of Madden's finest years, 2005 saw the introduction of the quarterback vision cone and Superstar mode. Neither of these features was particularly popular, and even though the series made its debut on the Xbox 360, that version was conspicuously light on content. Madden NFL 06 cover athlete Donovan McNabb unwisely called out the Madden curse, which responded by giving the versatile quarterback a hernia. He missed the last seven games of the season.

2006--Madden NFL 07 launched on the new Wii and PlayStation 3 systems, as well as 10 other platforms! No wonder it sold 7.6 million copies. It also introduced the highlight stick and featured Shaun Alexander on its cover, who broke his foot three weeks into the season.

2007--Madden NFL 08 didn't introduce any groundbreaking new features, though it did finally find its legs on the Xbox 360 and PS3, running more smoothly than ever before. The new "Weapons" ratings distinguished star players on various teams, but these mostly seemed to be based on the same attributes system the series had been using for years. Vince Young, the Tennessee Titans' quarterback, was relatively untouched by the Madden curse, though that's probably because the starting-rookie-quarterback curse got to him first. Besides, the Madden curse was saving up its dark energy for...

2008--Though the new tutorial content and adaptive difficulty features are very interesting, Madden NFL 09 will almost certainly be remembered as the year the Madden curse completely outdid itself. Fortunately, as the curse gets better and better, so does the game. And while there's no telling which innovative features and unimaginable hexes we'll see next, if the past is any indication, one curse will remain constant: everything Madden touches will turn to gold. 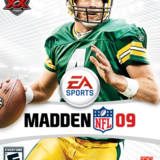