The World Ends With You Anime Will Premiere Next Year, Here's The First Trailer

The Nintendo DS/Switch game is getting an anime adaptation next year, and the art style looks a lot like the game.

The World Ends With You, the cult-classic Nintendo DS 2008 RPG that received an updated Switch port in 2018, is getting an anime, and now the first trailer is here to show off its fantastic art style. The trailer, released as part of Anime Expo Live, reveals that this is a pretty direct adaptation of the anime.

The trailer has launched alongside an updated website, which reveals the character designs and plot details--albeit in Japanese. The series is set to debut next year.

You can watch the trailer for The World Ends With You: The Animation below. Production is being handled by Domerica and Shin-El Animation.

The art style should be familiar to fans of the game.

A story synopsis is also available on the trailer's YouTube page, and just like the game it's about a seven-day "Reaper's Game" in Shibuya, Tokyo. The main character, Neku, has to team up with teenage girl Shiki to defeat monsters and uncover the truth behind the mysterious alternate dimension the characters find themselves in.

We still don't know several details about this anime, including whether a dub is planned and how many episodes we can expect. 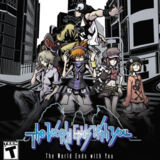 The World Ends with You
Follow
$54.45 on Amazon
Buy

View Comments (2)
The World Ends with You
Square Enix