The Walking Dead VR Game Saints & Sinners Is Getting A Sequel

Plus, it's announced that the first game has generated $60 million in revenue.

As for the sequel, it will continue the story of the first game and once again puts players into the shoes of the "tourist" who is on a "gruesome adventure" to survive against the undead in New Orleans.

"Along the way, players will encounter new characters and face new threats as they make gut-wrenching choices that will determine their fate," reads a line from the game's description.

Skydance boss Chris Busse said in a statement, "We're grateful for the continued support from the player community who have helped make the game the success it is today."

More details on Chapter 2 will be announced later this year. So far, no release date or platform details for the VR game have been announced. The 2020 original launched first on Steam and Oculus before coming to PlayStation VR.

Saints & Sinners was one of the most-downloaded VR games on PSN in 2021. The game's popularity was no doubt fueled in part by how it was offered free for PS Plus subscribers in November and December.

According to the NPD Group, VR and AR hardware sales rose by more than 100% during holiday 2021, and sales are expected to be strong in 2022 as well. 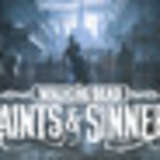