The Story of Zombies, Run

How an indie took on Nike, challenged the rules of narrative design, and started the Kickstarter revolution.

"Mind your step!" says our guide as we clamber up a seemingly never-ending labyrinth of clanking ladders and rickety platforms buried within the darkest recesses of the Southbank Centre, London. Our destination was something of a mystery, and as we passed through a series of doors, unperturbed by the brash "Authorised Personnel Only" signs hung above the frame, it became apparent that this wasn't going to be a run-of-the-mill coffee shop interview.

We were led outside, where a smattering of rain did little to aid our ascent up the slippery steel platforms. "Sorry the lift is out of action", says our guide rather unconvincingly, "but there's not much further to go." We glanced longingly at the lift shaft, but despite our tired legs there was a mutual understanding that the stairs might be the more acceptable method of reaching our destination--the whole thing looked like it would topple over with the mere whisper of a breeze.

None of us were quite prepared for what awaited us at the top of the final set of stairs. For there, perched precariously over the edge of the roof, was a boat--or at least, a building resembling one, its wooden frame concealing what was, for all intents and purposes, a luxury log cabin. This wasn't the first place I had in mind to speak to Naomi Alderman and Adrian Hon, creators of the hit iOS fitness game Zombies, Run.

"I thought I had to do something useful with my life," says Naomi as I ask her how she got involved with the Zombies, Run project. "It had to mean something to me." One could hardly call her previous career at a city law firm useless, but there was a noticeable pride in her voice as she described her work on Mind Candy's Perplex City.

"I thought I had to do something useful with my life. It had to mean something to me."

The success of Zombies, Run wasn't down to Naomi's literary prowess alone. Heading up Six To Start (the development studio behind the game) is Adrian Hon, a neuroscience graduate who dropped his PHD to work on Perplex City alongside Naomi.

"Mind Candy then went on to create Moshi Monsters," he says with some disdain, "but it wasn't the sort of thing I was really into. So, I decided to set up Six To Start with my brother and some other people from Mind Candy. We started doing a lot of work for hire with the BBC, Channel 4, and Disney, but we always wanted to make our own games--I imagine that's what everyone wants to do."

Of course, making games isn't cheap. Nor is it easy to court investment when your concept is as out there as an audio-based running game where you live through a zombie apocalypse. For an indie like Six To Start, a lot of that investment comes from government funding or private investors. But, when I ask if such avenues were an option for the studio, the pair simply laugh it off.

"With Zombies, Run," says Naomi, "we would have never got funded in that way. It's a game that sounds weird, and there are a lot of people out there commissioning to cover their backs. At least until you've had some success. I'm pretty sure we could go out there now, and say 'why don't you commission us to do another game?' and they would go 'fantastic!' The problem is there's just not enough risk-taking."

Adrian interrupts. "The other thing is, commissioners and publishers are trying to guess what the audience wants. How can they do that? Some people are really good doing that, but it takes a lot of time and experience. And even if you're really good at doing it, you still only get right 50 percent of the time."

Adrian's solution was to turn to Kickstarter and crowdfund the game. That was last October, before the days of Tim Schafer and of the Pebble E-Ink watch, both of which attracted millions of dollars of investment. By contrast, Adrian was asking for a mere $12,500 to complete the game. He ended up with over $72,000. It was the most-backed game project on Kickstarter at the time, and the industry's reaction has been one of high acclaim--so much so that Adrian spends as much of his time giving talks on the subject as he does developing.

"The crowdfunding model restores a market signal. It's not just people voting; they're putting their money where their mouth is."

"The crowdfunding model restores a market signal. It's not just people voting; they're putting their money where their mouth is. They really want to see Wasteland 2, or Double Fine Adventure so much they'll put down $500, and it just so happens that it's money that developers can use. Getting investment takes months, sometimes years. I think Kickstarter is an easier way to get money. I'm not convinced we could have got more money from investors than we did from Kickstarter for Zombies, Run."

"With Kickstarter, as long as you produce the product people have bought, then they're happy," adds Naomi. "Investors will be coming back, constantly pressing you to make bigger and bigger profits. I know it's helpful to be able to grow big--some people just want to run the biggest company in the world--but I don't think that's our aim. For us, it's about keeping control of what we do."

And keep control they did. After months of development that included training the team in Objective C for iOS and overcoming the narrative issues that arose from having a genderless, constantly running player, Zombies, Run was launched. It was an immediate success. It quickly gained traction on the App Store, with tweets and Facebook posts from the game increasing sales via word of mouth. It soon became the number-one fitness app, besting even the mammoth Nike Plus--quite an achievement for an indie that hadn't even developed an iOS App before.

What makes the game's success even more surprising is its price. At £5.49 ($7.99) it flies in the face of App Store economics that--with just a handful of exceptions--have settled on 69p ($0.99) as the default price for apps. And it's a price that has stuck since launch. With over 100,000 sales, it has certainly not been a hindrance for the game, and it's a strategy that was clearly planned out, as the pair were proud to tell me.

"There are three reasons I can think of for having such a price. One is, we had promised our Kickstarter backers $20 of value for $10, so we had to make that up somehow. We couldn't sell it for $1; it would be a total slap in the face for the people that had given us the money. And it adequately reflects the cost of producing a game like this. Also, in terms of positioning, we would like to be compared to other things you might buy to get you fitter. Like, buying a pedometer--you wouldn't think anything of spending £5 on that. And also other things you might buy to tell you a great story.

"There's another reason for having a high price," adds Adrian. "If we had eight times as many sales at one dollar, you'd ask isn't that just as good? But then, we'd have eight times the support queries--we can barely deal with the amount we have now, so there are a lot of costs to consider."

By now the sunny skies of the South Bank had turned grey, and the once-bustling boardwalk was beginning to empty of people as they hurried inside to escape the impending downpour. And while I was beginning to become concerned too, I was eager to find out what was in store for the Six To Start team, once the impending Android release and new episodes were done and dusted. The horrible phrase "triple A" escapes my lips, but before I can take it back, Naomi is quick to chime in.

"I have friends that work on some of those big [AAA] titles, who have told me about the tremendous creative frustrations of trying to get their visions realised. Zombies, Run is exactly as I wanted it to be."

"I have friends that work on some of those big titles, who have told me about the tremendous creative frustrations of trying to get their visions realised. Zombies, Run is exactly as I wanted it to be. Not a drop has been lost from the story that I wanted to tell and from the game that I wanted. I haven't had that 'I want to make it like this but they've taken away half of my cutscenes and now the story doesn't make sense anymore.' From that point of view, I suspect that working on a triple-A game would be a really interesting experience, and I think I would enjoy it, but only because I have the stuff where I'm also in control."

I ask what it is she wants to be "in control" of. There's a thoughtful pause before she simply says, "Narrative."

"I had already thought about ways to put a good story in Zombies, Run. I didn't face that challenge that a lot of game makers face where they come in late in the process, and a lot of the game's already made. I once had someone say to me, 'Just wrap a story around it.' Those are the words you never want to hear. I feel like that's something we've achieved with Zombies, Run, that the story and the gameplay feel very integral to each other, and neither would be as good without the other."

I'd already packed most of my things away and started my good-byes when I glanced out the window to see the weather had turned in a typically quick British fashion from the nastiest of greys to the most splendid of sunny blue skies. There was time for one more question. And outside of a seminar hall, this was as good a time as any to get some crowdfunding advice.

"Use it as a proving ground for your ideas" says Naomi. "Spend a good month getting your ideas polished up. Present it as well as you possibly can. Choose an amount of money that will enable you to make a bare-bones version of your project. Ask for that and be realistic. If you can't get the money, junk the idea. That's how you must use it. Just accept that it's a bad idea. Ideas are not precious, once-in-a-lifetime things.

Instead of spending two years building prototypes before bringing an idea to market and finding out no one wants to buy it, stick it on Kickstarter to find out. Fail fast. You can't, sitting at your desk, work out what everybody in the world will like. The only way to work that out is to ask!"

And with that I stepped off the boat and walked to the edge of the rooftop. As I glanced down at the South Bank boardwalk, the crowds had returned, and buried within them was circus of fitness freaks, jogging purposefully alongside the river. I imagined them all as potential Zombie, Run customers, each absorbed in his or her own personal narrative and escaping from the throws of their private zombie apocalypse. Not a bad place to do an interview after all, I thought. 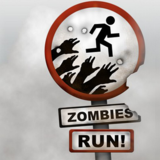