The Sims Online off to slow start

Initial sales of The Sims Online have been less than expected, EA executives acknowledge.

Electronic Arts executives have acknowledged that the initial sales of The Sims Online haven't met the company's high expectations for the online game. About 82,000 players have registered for the game since its debut December 17, EA executives said during a conference call to discuss third-quarter financial results. EA originally forecast it would have 200,000 players registered by the end of its current fiscal year, March 30.

The Sims Online is the multiplayer online version of the smash PC game The Sims, which has sold more than 8 million copies and ranks as the biggest-selling computer game of all time. EA expected similar results for the online version, which requires players to buy the boxed software and pay a $10 monthly subscription fee to access online content.

Game industry observers and EA executives have touted The Sims Online as the ultimate test of whether online gaming, currently dominated by fantasy role-playing games, can attract a mass-market audience. Inside EA, the game was seen as the main tool for pushing the company's money-losing EA.com online business to profitability during the next fiscal year.

Initial sales have been "disappointing," however, according to EA executives. The game has ranked near the bottom of research firm NPD Funworld's weekly top-10 sales chart for the past few weeks, below several older editions of the offline version of The Sims.

EA executives said the company was taking a number of steps to boost interest in the game, including cutting the price of the boxed software from $49 to $39, effective next week. Additional content also is being added to the game to give players more to do.

"The level of content we'll have in this product by April, we'd like to have had that at launch," EA COO John Riccitiello said during the conference call. "We probably made an error in expectations. We feel great about the intellectual property, and we expected the transfer to an online model to be a quick hit in the marketplace."

CEO Larry Probst said EA is committed to the game and believes it can be a success. "I think it's important to realize this is a marathon, not a sprint," he said. "We're committed to making this a huge success, and that's about constantly updating and refreshing the content."

Despite The Sims Online's weak liftoff, EA still reported record earnings and revenue for the third quarter, which ended December 31 and included the critical holiday shopping season. The company reported net income of $250.22 million for the quarter, compared with $132.29 million in the same period a year ago. Total revenue was $1.23 billion, compared with $833 million a year ago. 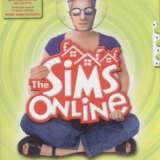