The Sims Medieval Updated Q&A - The Hazards of Medieval Life

Executive producer Rachel Bernstein begins counting the many ways that sims can endanger themselves or flat-out die in The Sims Medieval. (She runs out of fingers pretty fast in this one.)

While The Sims has become a series known for controlling the lives of little computer people as they putter around little computer suburbia, the next Sims game will go in a completely different direction. The Sims Medieval, which will be released on March 22, takes place in the Dark Ages, a time when knights served their king, cutting-edge medicine was a jar of leeches, and serfs were definitely not up. As we've discussed previously, this unusual entry in the Sims series won't have the open-ended nature of its forebears. Instead, the game will focus on the stories of specific characters and the quests they must perform to move these stories forward. It will also have a beginning, a middle, and an end--a point at which your game session ends and you're given a score based on how well you and your kingdom fared. There will be many challenges to face in The Sims Medieval that stand between you and a high score. Be warned: While some are potentially fatal, others are intended to be kind of funny. Executive producer Rachel Bernstein explains.

GameSpot: We understand that life in The Sims: Medieval is a bit more dangerous than in the suburbs of Sunset Valley (where one of the deadliest hazards is a burning kitchen). What's the leading cause of death for sims in the medieval era?

Rachel Bernstein: Sword wounds to the gut. Hands down.

GS: On that note, can we expect to see some of the hazards that Sims players know and love rear their ugly heads in Medieval? Will that tiny contingent of sadistic Sims players who enjoy purposely killing their little computer people (surely, there are very, very few of these sick, sick people out there) still be able to sabotage little virtual lives? Accidental blacksmith fires? Embarking a ship to sea and immediately deleting the docks afterward?

RB: Our more deviant players should find no shortage of ways to harm their sims, despite the lack of pool ladders. I expect people will enjoy such grief as sending sims off to hunt bears with low focus, placing a keg in the throne room and adding a touch of "reaper's scythe" poison, or sending a plague-ridden sim into the reception hall on a make-out spree.

GS: Aside from shuffling off this mortal coil, what other slings and arrows of outrageous misfortune can befall sims in this time period? We've seen imprisonment in the stocks and sentencing to the pit beast. How about the bubonic plague? Being tried and burned at the stake as a witch?

RB: Plagues and poisons (and other hazards that we'll get to) abound.

GS: What other external forces pose a threat to sims in the medieval era? Will floods or droughts affect crops, for instance? Will we see fearsome storms? Bandits on the outlying roads? Vorpal bunnies that are "dynamite?"

GS: Let's talk larger-scale threats. We understand, for instance, that you can choose to play as the ruler of a realm and engage in diplomacy and trade with your neighbors. What happens when kings and queens stop being polite and start being really angry with each other? How can rival nations compete with each other? Can they go to war, and if so, how will war unfold?

RB: Each neighboring nation has a specific way that you go about taking it over. Some may require political finesse, some straight-out conflict, some a carefully planned marriage. You influence the outcome of conflict in a variety of ways that unfold through the quest system. Everything is kept on the level of individual sims. For example, your knight might train up some new soldiers whom you send off to fight, or your blacksmith might make new weapons and armor and send it off to the front lines. GS: We know that Medieval is a different game from its predecessors, since the game has actual victory conditions and actually ends at a certain point. Is it possible to fail? Will there be a losing "Game Over" screen?

RB: There is no "Game Over" screen, but there's certainly a "Quest Failed!" screen that can be reached if your sim somehow dies on a quest or fails to complete it in a timely or effective fashion. We don't want the players feeling like it's easy to fail in the game, but we do want there to be consequences for the player's actions.

There is also the possibility of failure on an overarching ambition for each run-through of the game and the possibility of succeeding at the ambition at different levels of achievement: bronze, silver, gold, and platinum. For example, if players run a kingdom in the "imperial domination" ambition and fail to take over any foreign nation, they will fail the ambition when they run out of quest points. If they take over only two territories, they get a bronze. Taking over four earns them a silver and unlocks the "fame" ambition. Taking over six foreign territories earns a gold medal and adds the unlock of the "safe and sound" ambition. Taking over all the foreign territories earns the platinum medal.

GS: Given that there are so many new challenges for players to face in Medieval, what, in your opinion, is the most satisfying challenge to conquer? Is there a specific victory condition that's hardest of all? A quest line that's exceptionally challenging? A storyline that's really entertaining or otherwise rewarding?

RB: The hardest victory condition would certainly be earning every achievement. There are almost 50 ambition achievements, so to earn those, you'd have to get platinum level in every ambition. That's really hard.

There are more than 100 random other achievements, from grinding up a max-level wizard to throwing 100 sims in the pit of judgment.

GS: And given that Medieval is so focused on character-driven quests, how is failure to accomplish these quests handled? Is there concern about making some quests too punishing or humiliating to fail? Conversely, are there any quests that can be failed in entertaining ways?

RB: Failing a quest is not such a bad thing. Some players may intentionally fail a quest as part of the way they are telling their story in the game. For example, if one of the hero sims you are controlling on a quest dies, then you fail that quest. But this just means you have fewer quest points left in that play-through of the game. That may be a worthwhile trade-off for a player who has decided to kill off a hero sim in some entertaining way. Some quests are hard to win. Players who fail can play that quest again; perhaps with a different approach or with a different hero, or by making different decisions during the quest.

GS: Is there anything else you'd like to add about the dangers of medieval life in The Sims: Medieval or about the game in general?

RB: As you lead your sims on the adventures that shape their lives, you will find that medieval life was full of unexpected twists and turns. One minute, you're having your monarch practice military strategy with visiting foreign leaders. The next, your knight is being humiliated in the stockade. And before you know it, your physician is swallowing a locket to hide it from being discovered by the monarch's heavily armed guard. Medieval sims, medieval stories, medieval hazards. 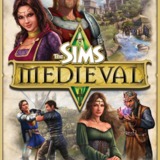