The Simpsons to appear in mission-based driving game

Radical Entertainment is currently developing a new game based on The Simpsons.

As part of its release of pre-E3 information, Vivendi Universal Games has announced its plans to publish a mission-based driving game based on The Simpsons. The game, titled The Simpsons: Hit & Run, is scheduled for a September release on the Xbox, GameCube, and PlayStation 2.

The game will mostly feature driving missions, but players will also be required to complete some on-foot missions as Homer, Bart, Apu, Marge, or Lisa. The game will feature 17 different drivers, including Cletus, Comic Book Guy, and Principal Skinner. More than 40 vehicles will be included in the game, including Cletus' pickup truck and Homer's Mr. Plow.

While not much has been said about what the missions will actually entail, players will be able to explore a lot of Springfield, inside and out. They'll be able to enter famous landmarks, such as the Simpson residence, the Springfield power plant, and the Kwik-E-Mart. The game will also feature a four-player multiplayer driving challenge mode.

The Simpsons: Hit & Run is scheduled for release on the Xbox, GameCube, and PlayStation 2 in September. 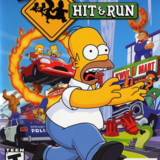