"It's going to be a lot more emotional, a lot scarier, and a lot more real than you'd expect."

A movie based on the classic video game Rampage is in the works, and it has some high-profile talent attached to it. Dwayne "The Rock" Johnson will star, with Lost scribe Carlton Cuse on board as a writer; Brad Peyton (San Andreas) is set to direct. Now, Peyton has shared some new insight into why he thinks the game is suited for a big-screen adaptation and what you can expect from it.

Speaking to WeGotThisCovered, Peyton said the film takes its inspiration from the original game, adding that those involved with the film's production "love" the title. He went on to say that he thinks people will be surprised by what the Rampage film delivers.

"We're going to build a movie, like San Andreas, that is really going to surprise people in what it delivers," he said. "It's going to be a lot more emotional, a lot scarier, and a lot more real than you'd expect."

Peyton went on to say that the "nugget" of the Rampage movie will be the same as the game: gigantic monsters going on a rampage. Peyton also discussed how his newest film, the supernatural horror movie Incarnate, may help improve the Rampage movie.

"This 'small, character piece' with horror in it trained me to get ready for [Rampage]," he said. Obviously, [Rampage is] a much bigger movie and it's meant for a broader audience, but there still horror elements, there's still a monster movie at the core. And I get to work with Dwayne Johnson again. I'm so excited about it."

Also in the interview, Peyton talked about why he thinks some video game films go wrong. He said it might be a mistake for a film adaptation of a game to follow the source material too closely.

"If they called me tomorrow to do Call of Duty, I wouldn't want to play any of the Call of Duty games," he said. "I'd have to come up with something that deserves to be its own thing. That's where a lot of these movies can go wrong."

For what it's worth, Activision is working on multiple Call of Duty films, though no official announcements have been made at this stage.

Earlier this month, Resident Evil series director Paul W.S. Anderson said part of the reason some video game movies are poorly received comes down to the filmmakers being disconnected from the source material.

"You see filmmakers giving interviews, saying, 'I never played the video game,'" he said. "It is very disrespectful to the IP. How can you adapt something without understanding the original IP? You'd never dream of adapting a book without reading it. Somehow, people feel with video games it's OK just to kind of jump in there without really understanding its DNA."

Speaking about the Rampage film earlier this year, Johnson said he'll do his best not to screw it up, which is something he also said about the Jumanji sequel.

"If you were a fan of the video game like I was, then you KNOW how badass and fun this movie can be. I'll try not to screw it up," he said.

Rampage was originally released in arcades back in 1986 before being ported to more than a dozen other platforms--it's appeared on everything from the Commodore 64 to the PS2. It's also seen a number of sequels produced, though by the time the movie comes out, it will have been more than a decade since the last of these, Total Destruction, was released. 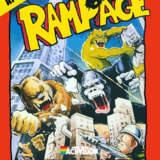