This creepy reworking of a classic fairy tale tells the story of growing up, and the only way to win is to ignore all the instructions.

There's something inherently creepy about fairy tales when you think about them, whether it's leaving poor Hansel and Gretel in the woods to die, wicked witches who live in gingerbread houses and eat children, or Little Red Riding Hood arriving at Grandma's house to find a wolf lying in her bed and dressed in her clothes.

This creepiness is undoubtedly why so many writers and game makers choose to revisit these childhood bedtime stories and add their own interpretations--for example, the mad version of Alice trying to claw her way back to sanity in American McGee's Alice, Angela Carter's dark retelling of popular fairy tales in The Bloody Chamber, and Neil Gaiman's Sandman series.

The only way to make progress in the game is to completely ignore the instructions you are given, which tell you in bold capital letters, "Make it to grandmother's house. Do not stray from the path." You can do exactly that, walk straight on, reach the house without incident, and snuggle up safe and sound next to Grandma. But this gives you an automatic fail and sends you back to the beginning.

The game is about growing up--and children don't grow up by following the rules and doing exactly what they're told. They grow up by being naughty, doing things that they shouldn't, and learning to live with the consequences of their actions.

To achieve a win at the end of the chapter, you will need to find and interact with the wolf--in whatever form he, she, or it may be. The forest stretches out before you to the left and right, and Red must explore it to find things to interact with, and ultimately, throw herself at the mercy of the wolf.

There are also a number of other things hidden in the forest to stumble upon and interact with. You don't get a choice as to what Red will do when she finds something; once you get close to it, she will choose an action. Finding and interacting with these items will change the appearance and the items inside Grandma's house.

We played a technical build of one of the chapters, which featured our Red as a young teenager with a brace on her left leg, dressed in a miniskirt and striped red and black sweater.

Red is moved about the environment using the cursor keys, and her basket can be accessed by pressing escape. Any interactions with items in the forest will be recorded in there.

The Path is a bold game which tries harder to be a work of art and be atmospheric than it does to have actual gameplay. In fact, this is a deliberate move on the part of the creators, who admit that in previous versions of the game, the gamer was given much more control while interacting with the environment, but that they decided to take this away to strengthen the atmosphere.

The game is being developed by Tale of Tales, the team behind the screensaver/multiplayer online game The Endless Forest. In the Endless Forest, much like in The Path, gamers navigate through a forest, in this game, as a deer. You can engage in a number of activities or minigames, and interact with your friends' deer avatars through sounds and body language. People were unsure whether to classify The Endless Forest as a game or notdue to the lack of rules and goals.

Tale of Tales is a Belgium-based development studio, set up in 2002 by Auriea Harvey and Michael Samyn. They currently anticipate that The Path will be ready for release in 2009, and will be available via both digital download and boxed copies at retail.

For more information on this game, check out GameSpot's Q&A with the creators. 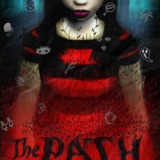