Four more heroes for you to knock out with one punch are coming.

One Punch Man: A Hero Nobody Knows releases on February 28, and Bandai Namco has released a launch trailer to prepare players for Saitama's amazing power. The trailer, amusingly, is a compilation of the eponymous One Punch Man beating every other character with a single punch.

You won't need to worry too much about whether this completely unbalances the game, though. Players who pick Saitama as one of their two fighters must survive long enough to actually use him, as it takes a while for him to arrive at the battlefield thanks to the "Hero Arrival" mechanic.

The launch trailer is below, and at the end it reveals that the game will get a season pass, introducing four new fighters post-launch.

The first fighter, coming in April, is Suiryu. In the anime, Suiryu fought Saitama in the Super Fight Tournament, and was rather boastful of his martial arts abilities. Saitama defeated the fighter by slamming his hip into him.

One new fighter will be added in spring, and then two more in summer. You can see their silhouettes at the end of the trailer, and series fans might have some good guesses at who the other characters will be. 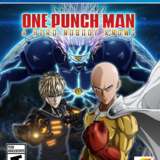 One Punch Man: A Hero Nobody Knows
Follow
$26.13 on Walmart
Buy

View Comments (1)
One Punch Man: A Hero Nobody Knows
PlayStation 4
Xbox One
PC